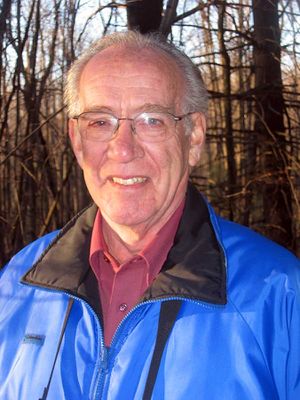 Jack attended Coaldale Mennonite Brethren Bible School and Alberta Mennonite High School, Coaldale, (1955-56) where he was active in the choral life of the school, and where he met Eleanor Toews. From 1956-59 he studied music and theology at Mennonite Brethren Bible College, Winnipeg, Manitoba, graduating with a BTh degree. In 1959-60 he attended Waterloo Lutheran University (now Wilfrid Laurier University) in Waterloo, Ontario, graduating with a BA. Following two years as a camp director and youth worker in Manitoba and British Columbia, Jack taught music for two years (1962-64) at Sharon Mennonite Collegiate in Yarrow, British Columbia. From 1964-66 Jack sold cars at his brother’s dealership in Abbotsford, BC, reportedly putting one or two competing dealerships out of business. During that time he also undertook graduate studies at Western Washington University (Bellingham, Washington), graduating in 1966 with an MA in literature.

In 1966, Jack Dueck and his family moved to Goshen, Indiana, USA where he taught English at Goshen College from 1966-1978. In 1973 he completed a PhD in English literature from Notre Dame University (South Bend, Indiana). Jack and Eleanor organized student trips to Ireland and Germany. Jack was known for his unorthodox teaching methods, including staging his arrest by the local police while he was lecturing about the Russian novelist Alexander Solzhenitsyn.

His entrepreneurial proclivities surfaced during his years in Goshen when Dueck developed a farmers’ market, opened several restaurants and formed a consulting company, Management Associates. After leaving Goshen, he was a consultant for Penn Alps in Maryland, restored a bed & breakfast, and operated the Mill Restaurant in Cambridge, Ontario, Canada. After living near their children in Massachusetts (1999-2004), Jack and Eleanor retired to Waterloo, Ontario, where they were active members of Rockway Mennonite Church.

Jack was a legendary raconteur par excellence. It was a gift he had acquired from his storytelling step-mother who died tragically just two years after marrying Jack’s father. Her early passing plunged Jack into an abyss of emotional, spiritual and behavioral turmoil. His storytelling programs, sermons and motivational talks were always sprinkled liberally with humour and pathos. “Mysteries of Grace and Judgement” was the collective title of a series of dramatic presentations of hymns and songs and strong emotional narratives which he gave to large and enthusiastic audiences across Canada and the USA. An occasional contributor to the MB Herald and The Canadian Mennonite, Jack Dueck received 4 Canadian Christian Writing Awards from The Word Guild in 2010. In the 1960s, he and his close friend Rudy Wiebe (novelist and founding editor of the Mennonite Brethren Herald) gave life to Petronius and his Pew Pals, a short-lived whimsically satirical and humorous "comic corner" which addressed contemporary church issues.

Jack Dueck was diagnosed with an aggressive brain tumour in July 2014. Shortly thereafter he and Eleanor moved to her hometown of Linden, Alberta. He passed away in Three Hills, Alberta on 21 November 2014, listening to the music of Mendelssohn.