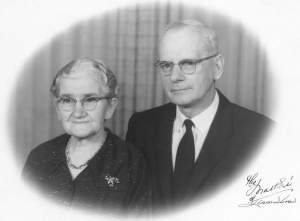 Nicholas N. "N. N." Driedger: church leader and farmer; born 7 June 1893 in Schönfeld, Ukraine to Nicholas A. and Katharina Warkentin Driedger. He was the third of four children in a family of three sons and one daughter. Nicholas attended Schönfeld's elementary and high schools. He was baptized in the Schönfelder Mennonite Church by Ältester Bernhard Epp on 9 June 1913. In 1914, Nicholas was drafted into the Red Cross Service (Sanitäterdienst). On 15 February 1918 he married Katharina Dick, daughter of Rev. Jacob L. and Agatha Loewen Dick, born 3 January 1897 in Schönfeld, Ukraine, in the Schönfelder Mennonite Church. Nicholas died 24 August 1988 in Leamington, Ontario,

Nicholas and Tina Driedger with their two daughters and mother Agatha Dick immigrated to Canada in July 1924. The family spent part of the winter in the Kitchener-Waterloo area; in December, Nicholas left for Newton Siding, Manitoba to prepare a new family home there. They spent three years in Manitoba before moving to Pelee Island, Ontario, where two sons were born to them.

The beginning of N. N. Driedger's church work, which was to last some forty-two years, occurred when he preached his first sermon in Newton Siding. In September 1929 he was ordained on Pelee Island by Bishop Jacob H. Janzen of Waterloo, Ontario. After the family's move to Ruthven, located on the mainland, N. N. Driedger became leading minister (Ältester) of the Essex County United Mennonite Church on Oak Street in Leamington, Ontario. Thereafter the family's financial situation worsened as N. N. Driedger received only small allowances for his full-time work in the church. Tina Driedger became farm and family manager, accompanied Nicholas on all visitations, attended Sunday afternoon catechism classes, and acted as N. N.'s sounding board.

Nicholas and Katharina Driedger retired in 1967. N. N. then had the time to write his book: The Leamington United Mennonite Church, Establishment and Development, 1925-1972 (1973). N. N. Driedger is remembered for building and enlarging the Mennonite community of faith in Essex County generally and the Leamington area in particular. He performed 279 marriages and 702 baptisms. He served his people with sacrifice and devotion, often placing the church's well-being ahead of that of his own family.