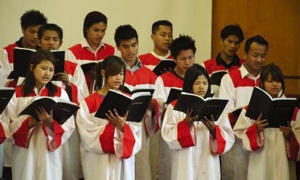 The Chin people were once an independent people in an area that is part of Burma (also known as Myanmar) and India. Many left their homeland because of persecution, and a group arrived in Kitchener, Ontario in July 2003. They initially met in homes when the group included only 15 people, but soon sought larger and more permanent space. The First Hmong Mennonite Church offered use of their building, and a strong relationship developed between the two groups beginning in November 2004. As a result the Chin group sought a relationship to Mennonite Church Eastern Canada. In April 2009 the Chin Christian Church became an emerging congregation within MCEC.

The Chin worship services in 2009, held Sunday afternoons, were much like a traditional Mennonite service, but longer. Music was an important componant of each service, including choirs and congregational singing. A "concert of prayer" followed the sharing time. Each service ended with the singing of "How Great Thou Art" in Chin. The sermon by Pastor Jehu Lian was also in Chin.

In September 2014 the congregation bought a former church building that had been used as a restaurant for eleven years. It hoped to reach out to other Burmese speaking immigrants in Waterloo Region. Attendance in December 2014 was about 130 each Sunday.