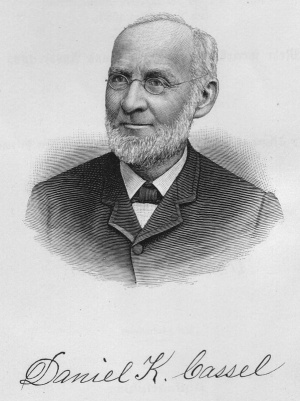 Cassel, Daniel Kolb. A Genealogical History of the Kolb, Kulp or Culp Family, And Its Branches in America, with Biographical Sketches of Their Descendants from the Earliest Available Records. Norristown, Pa: Morgan R. Willis, 1895: 61 f. Available in full electronic text at https://www.archive.org/details/agenealogicalhis00cass.

Cassel, Daniel Kolb. A Genea-Biographical History of the Rittenhouse Family And All Its Branches in America, with Sketches of Their Descendants, from the Earliest Available Records to the Present Time, Including the Birth of Wilhelm in 1644. Philadelphia: Rittenhouse Memorial Association, 1893. Available in full electronic text at https://www.archive.org/details/familyrecordofda00cass .

Cassel, Daniel Kolb. History of the Mennonites; Historically and Biographically Arranged from the Time of the Reformation; More Particularly from the Time of Their Emigration to America. Containing Sketches Fo the Oldest Meeting Houses and Prominent Ministers. Also, Their Confession of Faith, Adopted at Dortrecht, in 1632. Philadelphia: D.K. Cassel, 1888. Available in full electronic text at https://www.archive.org/details/historyofmennoni00cass.