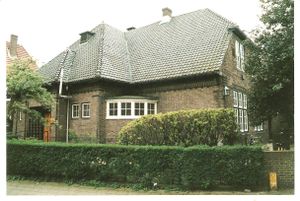 Bussum is a town in the Dutch province of North Holland, about 15 miles (25 km) to the east of Amsterdam, (1950 pop. 34,000; 2007 pop. 31,000), seat of the Naarden-Bussum congregation, with a church in Bussum. At the beginning of the 20th century many Mennonites, chiefly from Amsterdam, located here. The church board from nearby Hilversum, to which the members in Bussum belonged at that time, formed the Bussum fellowship in 1908, administered by a committee of five members, of which the chairman was a member of the church board at Hilversum. Originally one preaching service was held each month in the building of the Nederlandse Protestantenbond (first service on 24 January 1909). In the year 1915 the fellowship became a congregation entirely independent of Hilversum and chose its own church board. Initially, it was hardly possible to have a service each month, although at the time there was a program of religious education, conducted first by the emeritus ministers, among whom was Tj. Kielstra, and later on by several other ministers, among whom were W. Luikinga, M. L. Onnes, and J. L. de Wagenmaker. Of great importance was the erection of their own church, which was dedicated 8 July 1923. In 1939 the congregation received their first permanent minister in O. T. Hylkema, who served the congregation until 1944, and was followed by D. Richards. While the number of members varied very little at first (150 in 1917; 160 in 1926), it grew rapidly about 1930. In 1951 there were 435 members. The congregation also had a Sunday school for children, and fellowships for women, men, and youth.