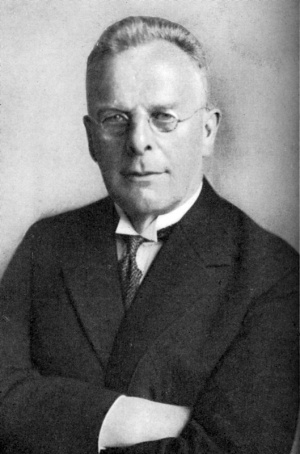 Arjen Binnerts, Szn., b. 29 August 1865, at Witmarsum, where his father was a Mennonite minister, d. 14 July 1932, at Haarlem. He was robust in appearance, with a manly character, a cheerful faith, and a gentle spirit; a sunny person. He was educated for the ministry at the university and the Mennonite seminary in Amsterdam; in September 1891 he became a ministerial candidate and in January 1892 he preached his sermon of acceptance at the IJtens congregation (1892-1897), where he found much time for study in addition to his pastoral work (he was interested especially in scientific and social questions). From 1897 to 1902 he served at Meppel and Assen, 1902-1907 at Rotterdam, 1907-1933 at Haarlem.

For many years he was a director of the Algemene Doopsgezinde Sociëteit and after its reorganization he served as chairman 1923-1928. After that he was appointed chairman of the board of directors of the seminary.

He did not limit his services to the Mennonite brotherhood. He was on the executive committee of the Dutch Protestant Union, and for many years held a leading position in the Central Committee for Liberal Protestantism.

In the Mennonite brotherhood and far beyond it Binnerts, in the course of years, became a man of note and importance. He was not only in contact with the Protestant groups in the Netherlands, in which connection the religious instruction of youth was his great concern, but he also sought connections with the Mennonites of other countries. In May 1911 he attended the anniversary meeting of the German Mennonites in Krefeld, and formed many a friendship there. In the next year he visited the German brethren in West Prussia. Through these contacts he became the appropriate man to be appointed chairman of the newly reorganized (1921) Commissie voor buitenlandse Nooden (Committee for Foreign Needs), which was later able to do so much for the brethren in Russia.

For those who knew Binnerts, especially as a pastor and preacher, with his cheerful piety, which never became superficial—how he wrestled with the question of war—he was a source of great strength. Albert Schweitzer related that a meeting with Binnerts in 1928 was for him an unforgettable experience. Binnerts' humor banished all false sentimentality. Binnerts was a liberal and remained one. But gradually a change took place in him. To extreme rational Modernism he was always averse. Spiritual inclination and study led him to the side of the so-called conservative liberalism (rechts-modernisme). More and more he became engrossed by the Gospel; he observed "that the Gospel has little to bring those who do not deeply realize that they are sinners before God." This emphasis on the Gospel as the happy message of the forgiveness of sins gave his preaching force.

In 1902 Binnerts together with the publisher L. Hansma founded the Doopsgezind Jaarboekje, serving as its editor until 1926, and writing many articles for it with his own hand. A collection of sermons under the title Het eene noodige (the one thing needful) was published in 1932. About his trip to West Prussia he reported in Doopsgezind Jaarboekje (1913).