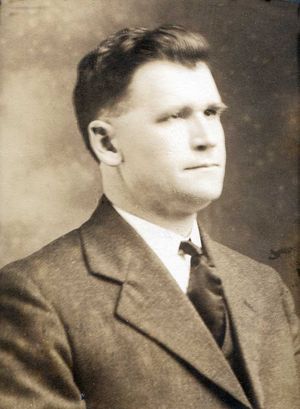 Living in the town of Elmira, Noah Bearinger must have been aware of the rising hostility toward Mennonites who refused to fight in World War I and whose everyday language was a dialect of German. On 23 May 1917 he wrote a letter to his Member of Parliament, William Weichel, suggesting that Mennonites might make “a memorial gift for war relief” as a gesture of goodwill.

Bearinger was present at the organizational meeting for the Non-Resistant Relief Organization held 17 January 1918, but there were others who were official representatives of the Old Order Mennonites. He was a strong supporter of the work of the NRRO but did not serve in an official capacity in the early years.

By the 1920s, Bearinger owned a lumber business and built a house beside it on Duke Street in Elmira. When he bought a car in 1926 he was no longer a member in good standing in the Old Order church. For some years he attended Elmira Mennonite Church, but sometime in the 1930s he joined the Old Order Mennonites of the Markham area who allowed cars. The Bearinger family was part of the Markham-Waterloo Mennonite Conference after it organized in 1939.

Noah Bearinger passionately believed in the need to be a witness for peace during times of war and that conscientious objectors should be active rather than be regarded as freeloaders who just avoid military service. He was deeply hurt by church members who criticized his work and his relationship with his church was never properly restored.

Frey, Darrell. Called to be a Solder: Experiences of COs at Alternative Service Camps during WWII. Darrell Frey. Wallenstein, Ont. : Vineyard Publications, 2014. The book includes copies of Noah Bearinger correspondence.

Marr, Lucille. The Transforming Power of a Century : Mennonite Central Committee and its Evolution in Ontario. Lucille Marr. Pandora Press, 2003.