From GAMEO
Revision as of 23:29, 17 November 2021 by AlfRedekopp (talk | contribs)
(diff) ← Older revision | Latest revision (diff) | Newer revision → (diff)
Jump to navigation Jump to search
A checked version of this page, approved on 17 November 2021, was based on this revision. 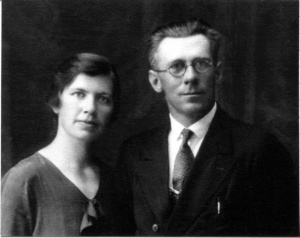 Henry G. Bartsch: missionary to the Congo; born 17 December 1896 in Sparrau, Molotschna, South Russia to Gerhard Bartsch (1867-1918) and Anna (Siebert) Bartsch (1867-1944). He was the second child of a family of six-- three sons and three daughters. In 1923 Henry was caught in the terror of the Russian Civil War and escaped miraculously several times. On the last occasion, while crossing a field in the dark, he fell on his knees and made a life-long commitment to the Lord. He came to Canada, where he worked on his uncle's farm in Dalmeny, Saskatchewan. During the winters he attended the Herbert Bible School for two years, and two years later, graduated from the Winkler Bible School in Manitoba. Here he met his life's partner, Anna Funk.

Anna Bartsch, missionary to the Congo, was born on 6 February 1897 in Katerinovka, Chortitza, South Russia. She was the 10th child of a family of 18, born to Johann Funk (1860-1932) and Helena (Loewen) Funk (1863-1938). Anna was baptized in the Mennonite Brethren Church in Milloradovka (neighboring Katerinovka) in 1913 at the age of 16. She attended the Mennonite Brethren Bible School in Tschongrav, Crimea where she studied with Abraham H. Unruh. In 1926, at the age of 29, she immigrated to Canada and attended the Winkler Bible School where she met Henry Bartsch. They were married during a Sunday morning church service in Dalmeny on 20 May 1928 and resolved to devote themselves to missionary work in the Congo.

As they had only limited financial resources they sold what they had acquired in Dalmeny and journeyed by Ford Model T to Winnipeg. In the middle of the night and in a blinding snowstorm, Anna had to hold the folding window open with her fist so they could see where they were going. Soon, however, they found themselves in the city on the wrong side of the road. At that moment a policeman appeared: "And where do you think you're going?" he asked. "To Africa!" Henry blurted excitedly. The policeman replied sarcastically: "Well, Mister, you might just keep right on going. You've got a long way to go." Indeed, a long and arduous journey lay ahead of them.

On 12 January 1932 Henry and Anna Bartsch and their two daughters, Erna, born in 1929, and Lydia, born in 1931, arrived at the Kafumba Station in the Congo. After a year they moved north some 400 miles to pioneer a mission station in the Dekese region at Bololo. Although life was very primitive, two children were born here: Arthur, in 1933, and Karl, in 1937. The natives had never seen a white family, let alone children being born to a white couple. In 1934 Henry Bartsch returned alone to North America to attend to passports and to solicit funds for the mission. Giving birth to children in the tropics, teaching, administering and translating the Scriptures by kerosene lamp at night were a drain on Anna's energies. In January 1938 the Bartsches returned to Canada for a much-needed furlough.

On 25 August 1939 Henry Bartsch returned to Africa alone, expecting the family to follow, but World War II wrecked their plans. Anna couldn't sleep. Sensing God's guidance and contrary to all expectations, she canceled the trip. The Sam Sam, the ship which she and her children had planned to board, was torpedoed in the Atlantic and sunk. Henry continued the work alone for three years until it became too difficult. He returned to Canada on 15 May 1942.

The family moved to Yarrow, British Columbia in 1943 where Henry served as a minister in the Mennonite Brethren Church until his death in 1966 at the age of 70. Anna taught Sunday school, German School, and conducted Bible classes and a women's choir. In 1979 she moved to Clearbrook, BC where she spent the last years of her life writing and editing her autobiography, Die Verborgene Hand. She died on 10 October 1989 at age 92 and was buried in the Hazelwood cemetery in Abbotsford, BC.

The Bartsches had started a small work in Africa. Years later they continued to receive letters from Dengese speaking students who had been converted to the Christian faith. Children in Bololo were still singing the songs the Bartsches had taught them many years ago. The seed had been sown and was bearing fruit.

A series of articles by H. G. Bartsch and Anna Bartsch appeared in Der Kleine Afrikabote, published by the Afrika Missions Verein, Winnipeg, 1936-43.