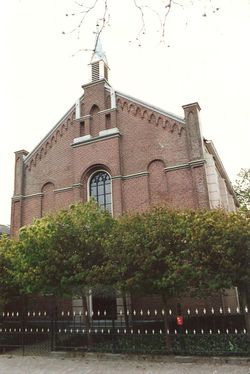 Barsingerhorn (pop. 2,151 in 1947, with 711 Mennonites), a village in the Dutch province of North Holland between Alkmaar and Den Helder, where there was a Mennonite church with parsonage, the center of a widely scattered congregation which until the 1920s was called the congregation of Barsingerhorn, Kolhorn, and Wieringerwaard, but by the 1950s was called by only the first town. In this "Head of North Holland" there have been Mennonites from the very beginning of the movement. The martyr Willem Wiggersz of Barsingerhorn listed by van Braght (Martyrs Mirror) was imprisoned there in 1534. At the same time there were also Anabaptists in the neighboring Kolhorn. From this time on the existence of congregations here may be assumed. Leenaert Bouwens baptized 41 persons at Barsingerhorn between 1551 and 1561. The history of the congregation or congregations here is obscure for a century, and afterwards data is very scarce; the earliest written document of the congregation dates back only to 1703, and not until 1755-1759 and again from 1776 on, are there any minutes or records in the church books. A Flemish congregation was represented at the conference at Haarlem in 1649. There were also delegates of this congregation, which is called Barringhorn and Nieuwe Zijp, at the Flemish Synod of Leiden of 1660. The Flemish congregation of Kolhorn probably merged with the Waterlanders later on. According to the Naamlijst of 1731 there were two congregations: one Waterlander, which was also called Barringhorn and Nieuwe Zijpe, and had a meetinghouse at Barsingerhorn and later also in Nieuwe Zijpe or Wieringerwaard; the other Frisian, also called Barsingerhorn and Kolhorn, which had churches both at Barsingerhorn and Kolhorn. The Frisian church in Barsingerhorn was repaired in 1759; but in 1799, after the English soldiers had used it roughly, it was torn down. The Frisian church in Kolhorn was demolished in 1788 and replaced by a new one in 1790. An unusual fact about this church is that it was built entirely of wood in six hours on 25 October 1790; on the next day the parsonage, also of wood, was put up in three hours. From this time on, this congregation, which in 1784 had only 13 members, had only the one church and parsonage in Kolhorn. The pastor, D. Hovens, had some difficulty with the preacher of the Reformed congregation, because he had given catechetical instruction to a non-Mennonite girl.

The Waterlander congregation, which was also sometimes called Barsingerhorn and Wieringerwaard in the 18th century, was much larger; its membership stood at 230 in 1730, but by 1806 it had dropped to 119. After many fruitless attempts, in 1755, 1781, and 1821, as well as at other times, the union of the two congregations was finally accomplished in 1827, when both congregations happened to be without a preacher at the same time. The united congregation had a membership of 240 in 1840, 300 in 1861, 427 in 1898, and 360 in 1950. Many of the members lived in the surrounding villages. The church at Kolhorn was soon abandoned, that in Wieringerwaard in the village of Kreil renovated, and a new one built in Barsingerhorn. A new parsonage was built in 1938.

In the congregation in 1953 there was a women's organization, a youth circle, and a Bible circle; together with the Reformed congregation it supported a Sunday school for children.

Braght, Thieleman J. van. The Bloody Theatre or Martyrs' Mirror of the Defenseless Christians Who Baptized Only upon Confession of Faith and Who Suffered and Died for the Testimony of Jesus Their Saviour . . . to the Year A.D. 1660. Scottdale, PA: Herald Press, 1951: 442. Available online at: http://www.homecomers.org/mirror/index.htm.