From GAMEO
Revision as of 18:38, 17 February 2017 by SamSteiner (talk | contribs)
(diff) ← Older revision | Latest revision (diff) | Newer revision → (diff)
Jump to navigation Jump to search
A checked version of this page, approved on 17 February 2017, was based on this revision. 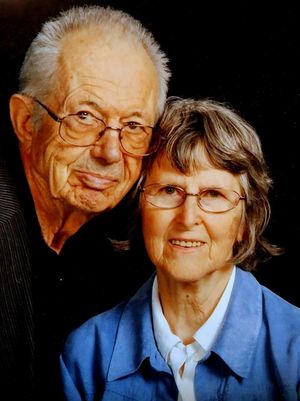 Benjamin "Benno" Gerhard Barg: a teacher administrator, and a gentle Christian whose desire for justice and to help people made him an activist, taking him into situations like conflict zones in the Middle East.

Early on, Benno knew farming would not be his life’s work. A hailstorm that destroyed Alberta crops opened the door for a return to Ontario where he had attended Ontario Mennonite Bible School for two winters after graduating from high school at Mennonite Collegiate Institute, Gretna, Manitoba (1952).

With no money for school, Benno worked in trucking and construction to earn enough to enroll at Stratford Normal School (teachers college). Both he and Jean graduated in 1956 and began teaching careers. After a move to Toronto, Benno taught with the Scarborough Board of Education (1959-1970) and rose to science department head. That career ended when John Hess, his former Kitchener pastor and then administrator at Warden Woods Community Centre, invited Benno to assist him.

Always unconventional and innovative, Benno Barg overcame his usual frugality and spent Warden Woods funds to purchase a computer in 1977, one of the first for non-profit agencies in the city. He spent 23 years at Warden Woods, first as building supervisor (1971), assistant administrator (1973-1979) then as executive director until he resigned in May 1994 and moved back to Kitchener.

He didn’t retire! Benno worked for his son, Gerry, at Barg Management (1994-2006) in numerous support and administrative roles including managing all the company’s technology. "He paid employees according to need," said son Gerry. "My dad had the lowest pay."

Benno’s strong urge to advocate for people suffering violence and injustice led him to engage with Christian Peacemaker Teams (CPT), first at a consultation with Innu people in Ottawa in February 1990, then with other First Nations people in southern Ontario in 1997 and 1998. After a training session in Kitchener, Ontario in May 1998, Benno became a CPT reservist. He served in First Nations communities in Ontario, in Labrador, and conflict zones in Nicaragua and the Middle East including several tours in Hebron. The inhumane and unjust treatment of Palestinians that he witnessed affected him deeply. Benno brought great passion to his work with CPT, expressing self-sacrificial love for all, as Jesus did, inspiring similar concern in others. He received credit for creating CPT’s mission statement: "Building partnerships to transform violence and oppression."

Violence of any kind, including war, was foreign to Benno's values and faith. He joined Conscience Canada, an organization founded by Friends (Quakers) in 1978 in Victoria, British Columbia. Conscience Canada provided a "Peace Tax Return" for use by people who conscientiously objected to having their taxes used for military purposes to register their objection. Benno was elected to the board of Conscience Canada (2008) and within the year became the organization's treasurer. He held that position until he resigned on 31 March 2012. He frequently encouraged members of his congregation to withhold the 8.4 percent of their income taxes destined for military activity.

Over the years Benno served his church and community on other boards and committees. A representative list includes Rockway Mennonite School, Mennonite Board of Education, Mennonite Church Eastern Canada Property Committee, and various boards related to Warden Woods Church and Community Centre in Toronto.

Benno was a man of strength, compassion and faith. "He did a lot of unique things," said Gerry. "He always put others first [and] taught me to see the good in people."