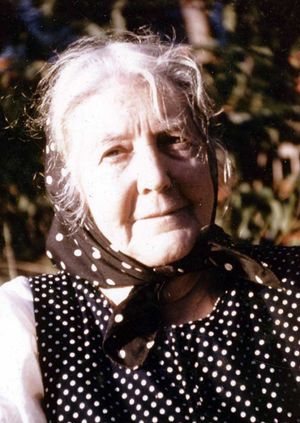 Emmy von Hollander Arnold was born 25 December 1884 in Riga (at that time a German city in Latvia), the daughter of Heinrich von Hollander, a professor of law, and his wife Monika. Because of increasing Russian suppression of German culture, the family immigrated to Germany in 1890 and eventually settled in Halle a. d. Saale. Emmy grew up there and, on 20 December 1909, married Eberhard Arnold. In 1920, after many years of active evangelistic work and search for full Christian discipleship, they started to live in community with their children, Emmy's sister Else von Hollander and others.

Emmy supported Eberhard in every step he took on his radical journey of faith, starting with their decision to be baptized as adults in 1907. This meant a break with both their families and leaving the Lutheran Church. The beginning of a communal lifestyle meant abandoning a secure home and job in Berlin. In her role as wife and mother to her own five children as well as numerous foster children, Emmy felt her responsibility keenly; they often lacked food and household necessities. But she and Eberhard trusted that God would provide, and they were not disappointed.

Eberhard died in November 1935. Emmy bravely continued as a widow. The Bruderhof's pacifist position and opposition to Hitler forced them to leave Germany for England and later Paraguay. In the 1950s Emmy moved to Woodcrest in New York State, where she lived until her death on 15 January 1980.

The Bruderhof movement (Society of Brothers) recognized her important contribution to their life and history. Emmy was faithful, courageous, and possessed childlike joy into her 96th year.

Arnold, Emmy. "Christmas Joy" and "Expectation and Fulfillment" in When the Time was Fulfilled. 1965.