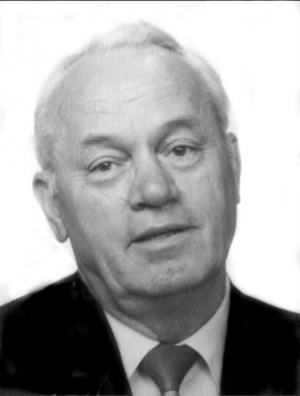 Peter Henry Andres was born 19 January 1905, in Gnadenthal, Russia, to Gerhard and Anna (Hildebrand) Andres, and died 12 March 1982 in Abbotsford, British Columbia. He was the third of seven children, four of whom were born in Russia before the family migrated to Canada in 1913. While the migration of the Andres family followed no major Mennonite migration pattern, it seems they sensed the onset of war and revolution which were about to engulf Europe, and Russia in particular. The family ultimately settled in Waldheim, Saskatchewan, where they began to farm. Peter was baptized on 13 July 1918 at the Waldheim Mennonite Brethren church by pastor David Dyck.

Peter demonstrated several things through his childhood and adult life. The first was a willingness to take up farming as an act of conformity to the community and of worship to God—this even though very little came of his agricultural endeavors whether on the Saskatchewan prairie or in the Yarrow raspberry patch. The second was a strong urge to follow academic pursuits at a time when such a career was not strongly affirmed in the Mennonite community. It seems that Peter's parents understood his need to leave the farm and pursue education. After a year of Normal School (one year post-secondary teacher training), Peter found his life's calling. By age 19 he started teaching, a career that continued virtually uninterrupted until he was 72 years old—more than 50 years later. By that time, he had taught in multi-grade country schools in and around Saskatoon, completed his BA in History from the University of Saskatchewan, which qualified him to teach in private and public high schools in British Columbia. He ended his teaching career by lecturing in Canadian History at Trinity Junior College (later Trinity Western University). However, his failure to complete a masters program which he had begun at the University of Oregon, remained a deep regret.

While teaching and living in Saskatoon, Peter courted Ann Rempel, second child of Abram D. and Susannah (Klassen) Rempel of Main Centre, Saskatchewan. It was Ann who brought a somewhat wayward Peter back to the church. They were married at the Main Centre Mennonite Brethren church on 16 August 1942, with Ann's minister father performing the marriage. Peter and Ann eventually had five children, two born in Saskatoon, and the remaining ones in British Columbia.

Peter also nurtured a strong concern for social justice which aroused his curiosity for political office. During the federal election of 1962, he was asked to stand as the New Democratic Party candidate for the Chilliwack riding. While there would have been no hope of him winning his seat in his very conservative riding, the real issue for him was concern for the response among his friends in his home congregation. Although his family encouraged him to pursue the campaign, his wish to avoid division within the church won out. It was clear to Peter that where the kingdom of the world and the kingdom of God collided, the choice needed to be made within the family of faith. This was a message understood by his family and friends only many years later.

Many students will remember Peter H. Andres as a superb teacher and encourager, not only in academic matters but also in regards to spiritual formation.