From GAMEO
Revision as of 23:16, 20 October 2019 by RichardThiessen (talk | contribs) (Added categories.)
(diff) ← Older revision | Latest revision (diff) | Newer revision → (diff)
Jump to navigation Jump to search
A checked version of this page, approved on 20 October 2019, was based on this revision. 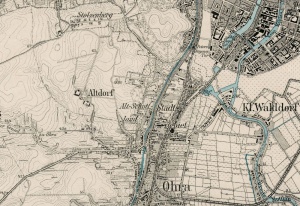 By the late 14th century, strong trade links had been established between the Danzig region and Scotland. The immigration of Scottish settlers to the Polish-Lithuanian Commonwealth began at this time and increased beginning in the last decades of the 16th century and continuing until the late 18th century. Many lived in what became known as Alt Schottland (Old Scotland), founded by Scottish settlers in ca. 1380.

In 1520 Alt Schottland, a property of the Bishop of Cujawien, was totally destroyed during the siege of Danzig by the Grand Master of the Teutonic Order, Albrecht von Hohenzollern. The Bishop strove to restore the former prosperity of the area, located outside the Danzig city walls, and accepted Dutch Anabaptists fleeing from the Netherlands and prohibited from settling in the city of Danzig onto his land holdings. Jews were also permitted to settle in Alt Schottland. Throughout the following years, the bishop defended the Mennonite tradesmen from attacks by the Danzig guilds, who complained that the Mennonites were competing with them without having memberships in the guilds.

For the West Prussian Mennonites a special edition of the Biestkens Bible was published in Schottland, a suburb of Danzig, in 1598, called the Schottland Bible.

Until 1772 Alt Schottland was located in what was known as Royal Prussia (also known as Polish Prussia) in the Kingdom of Poland. The First Partition of Poland in 1772 resulted in the creation of a new province on 31 January 1773, called West Prussia, in which the village was located. Alt Schottland was situated in the district (Kreis) of Stadtkreis Danzig until the establishment of the Free City of Danzig in 1920. The village came under the control of Nazi Germany during World War II until February 1945, when it was occupied by Soviet forces and returned to Poland.

In 1816, Alt Schottland had 36 Mennonite families living in the village. By 1820, all had moved, with most settling in the Altstadt (old city) of Danzig. This was due to the granting of citizenship in Danzig to Mennonites in 1800.