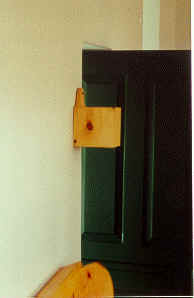 The alms box at the restored Detweiler Meetinghouse near Roseville, Ontario.

By the term, Alms (Almosen), the Mennonites of South Germany designated gifts of money which are placed in the offering box upon leaving the church at the close of a service. Twice this box is mentioned in the New Testament: Mark 12:41-44 (cf. Luke 21:1-4) and Matthew 27:6. The treasury in the Old Testament (2 Chronicles 24:6 f.; Nehemiah 12:44 and Nehemiah 13:4, 9) was intended to receive gifts for divine worship and particularly for the upkeep of the House of God. According to 1 Corinthians 16:2 the Apostle Paul advised the churches at Galatia and Corinth to gather some gifts of money on each Sabbath, and to lay it aside until he would come to use it for the needy brethren in Jerusalem. Thereby he laid the foundation for Sunday alms in the Christian Church.

We are therefore considering a primitive Christian custom. It most certainly agrees with the mind of Jesus. What He says (Matthew 6:3 and 4) about giving alms in secret is here beautifully fulfilled. It is a different kind of giving than a public donation, which one often gives in order to read his name in the list of receipts. The real purpose of this offering should be constantly kept in mind in all of our churches; the money should not be used to meet general church expenses, or the joy of giving will be lost. Where the collected gifts are used exclusively for alleviation of need among the brethren, this Christian custom is hallowed in a Biblical manner, and can create great blessing in our churches. This does not, of course, mean that other special offerings, such as for missions, cannot be placed in these boxes; these are usually announced beforehand. -- Neff

In Holland it does not seem to have been the original practice to collect alms during worship services, nor were alms boxes found at the meetinghouse door. Sometimes the deacons received gifts before the service. During the middle of the 17th century the alms box at the door was general. At the same time or somewhat later it became the practice in many Mennonite congregations to have the deacons collect alms during the services in a little velvet bag attached to a stick, as was usually done in the Reformed churches. This practice is still found in some of our congregations, but usually the alms are now dropped in boxes at the church door. In a great number of congregations the deacons formerly collected gifts by visiting the members of the congregation in their homes. The alms were and are usually separately managed, but in some congregations they go into the general treasury. -- vdZ

In the early Mennonite settlements in Pennsylvania (1683 ff.) and Ontario (1786 ff.) the custom of placing "alms" boxes at the exits of the meetinghouses was continued, and is still followed in the more conservative congregations there to this day. However, it also became the custom in many congregations in these regions and in daughter settlements, as is in general practiced by all congregations of the (Old) Mennonites, Amish Mennonites, and related groups, to receive an "alms offering" for the poor of the congregation at each communion service in connection with the observance of the ordinance of feetwashing. This fund is traditionally administered by the deacon, who is thought of as the custodian of the "alms" fund.

The use of the alms box at the entrance of the church must have been a very old practice among the Mennonites of Prussia and Russia, dating back to early days in the Netherlands. In many of the Canadian churches the alms box is still to be found, although the use of a collection plate in raising an offering is predominant. -- HSB