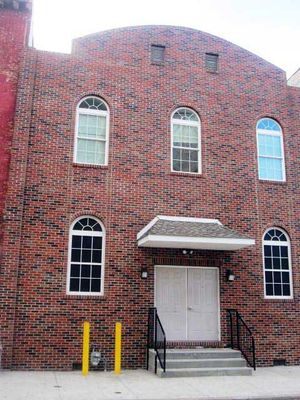 The Sixth Street Mennonite Church, in Philadelphia, Pennsylvania, USA, began as a tract distribution work early in 1989. Tent Meetings were held in July 1989 with Eli Yutzy as the speaker. Then a weekly Tuesday evening Bible Study was started in the basement of an old bank known as the Eli Iffy building on the corner of Germantown Avenue and Dauphin Street.

In 1990 the Mid-Atlantic Mennonite Fellowship Mission Board purchased a row house at 1336 North 6th Street. Dave and Cindy Weber were the first residents in the mission house. Sunday morning services began on 7 April 1991 in the front half of the first floor of the house. In 1992 Richard and Esther Boll (deacon from New Haven) moved into the apartment and the house next door was purchased. James and Rosalie Good moved into the city to help with the growing work. Dan and Marty Ehst were asked to move to the mission in 1995.

The Sixth Street Mennonite Mission was officially chartered as a Mid-Atlantic congregation in the fall of 1996 and the name was changed to Sixth Street Mennonite Church. The house on the corner of 6th Street was purchased and remodeled in 1999. In addition to more living space, the classrooms on the first floor were needed for Bible study classes.

The building was crowded, so two empty lots between the corner house and the two row houses were purchased in order to build the church. After years of waiting for the prints to be approved and permits to be granted, the building was finally completed and a dedication service was held on 14 November 2004.

Dan Ehst was licensed as minister for Sixth Street Mennonite Church in 1999. On 13 April 2014, John Glick was ordained as minister. Richard Boll, who had been ordained as deacon at New Haven, filled that role at Sixth Street, beginning when they moved to the city in 1992 and continuing after they moved back to Lititz in 1997. He and Esther moved back to the city in November 2003 and lived again at 1336 N. 6th Street until November 2005. Both Richard Herr and Larry Weaver served as bishop in the past. In 2013 Lester Z. Burkholder (Open Door) was serving as bishop. The average attendance was 50 and there were six members.