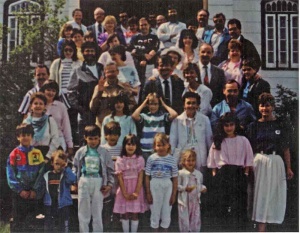 Far up in Abitibi, Quebec, in a mining area in early 1984, three families were left churchless after a division in a Plymouth Brethren congregation. Among them was Denine Cyr, daughter of Tilman and Janet Martin, who suggested contacting the Mennonites. Hubert Schwartzentruber of the Mennonite Conference of Ontario and Quebec arranged various visiting speakers to visit over one year. In September 1985, Robert and Lois Witmer arrived with a long missionary experience in Chatenay-Malabry, near Paris, France. The congregation began meeting in the Witmer home. In January 1986 the name was chosen of Église évangélique mennonite de Rouyn-Noranda and in March 1986 the congregation formed officially with 4 couples as founding members, accepted by MCOQ as an emerging congregation.

For three years there was rapid growth, reaching many who had had problems in other evangelical and Catholic churches. By 1988 there were 30 adults and as many children involved. From the beginning the congregation rented space in the All Saints Church, 38 Frédéric Hébert St. in Noranda early Sunday mornings with mid-week meetings at the Witmers. Very early, through initial contact with Donat Martineau, an Oblate priest, monthly ecumenical praise and prayer services were held in cooperation with three local Catholic parishes. In 1990 the former United Church pastor of the All Saints Church was baptized and became a Mennonite member. In the early 1990s, relationships with the small groups in both La Sarre and Val d’Or developed considerably, leading to participation in the MCEC annual conference sessions and to MCEC officially recognizing the La Sarre group as an "Emerging Congregation." Pastor Witmer also supervised other MCEC work in Quebec and northern Ontario until his retirement.

In 1994, Daniel Genest, a former Mennonite Brethren pastor, was selected as the new pastor of the three groups in Rouyn-Noranda, Val d'Or and La Sarre. However, the La Sarre group soon withdrew from its signed agreement; the Val d’Or group had difficulty developing whole-hearted support; and in Rouyn-Noranda commitment of members and participants became less stable. Thus by 1996 with little chance of self-financing, Daniel Genest returned to Montreal but continued as pastor till 1999 organizing speakers from afar and visiting periodically. The congregation moved out of All Saints saving money but gradually declined. Strong lay leadership continued including Marie-Reine Morin, a former Roman Catholic nun who served in 2000 as a congregational leader while Benoit Laplante was the teacher. Several teens became quite committed through the Mennonite Central Committee Summerbridge programme. Nevertheless the group was too small to continue and though grateful for Mennonite support, they voted to dissolve in 2001.

The language of worship was French.