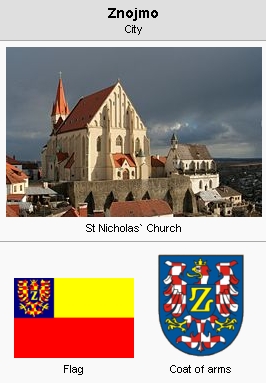 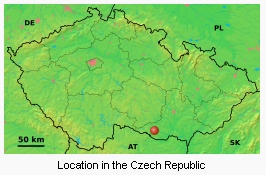 Znaim is the German name of the city now known as Znojmo, in the South Moravian Region, a city (population: 19,565 in 1959; 36,618 in 2005; coordinates: 48° 51′ 20″ N, 16° 2′ 56″ E) in the Czech Republic, where Anabaptism found early entry and met with violent persecution in 1528. The Hutterite Chronicle lists seven martyrs at Znaim. That Anabaptism was not wiped out by this persecution is seen from the records of the trials of Anabaptists from Moravia imprisoned in Passau in 1535-36 who mention numerous Brethren from Znaim and the vicinity and their leaders. Thus Matthes of Auer confessed that he had been staying for 1½ years in and around Znaim with 50 Brethren. Stoffel Aschenberger, the leader of the group seized at Steinabrunn (1539) and condemned to galley slavery, wrote a letter at Falkenstein, where they were first imprisoned, to the ministers and leaders at Znaim (1540). Although they were from time to time pushed out, they always managed to return. Thus in 1559 they had a religious disputation in Znaim with the emissaries of the Bohemian Unitas, Jan Jelecky and Wenzel Solin. Later the Anabaptists were not beheaded or burned at the stake, but expelled; on 23 October 1571, Balthasar Tischler, Hans Truchel, a woman, and an old glazier met this fate. A similar fate befell the Brethren who had been called by the city council to repair the fountain at the upper square and who had done their work well and cheaply. Among the nobility of the vicinity the Anabaptists had a notable friend in Wenzel Rischan, lord of Rosenstein, who kept them in his mill at Nesslowitz, for which reason he was accused at the imperial court and was consequently compelled to expel the Anabaptists. To avoid carrying out the decree he sold his mill to Adam Kaigel, who was just as benevolent to the Anabaptists as his predecessor. They were considered quiet, industrious, and honest workers and were used by the citizens in their businesses, in spite of objection by the city council and the clergy. According to a note in the archives of the Dominican monastery at Znaim there were Anabaptists also at Zerotitz, Garwitz, Jaispitz, and Durchlass, with a leader who had his seat at the Aumühle near Durchlass, but was expelled with his people by imperial orders in 1613.