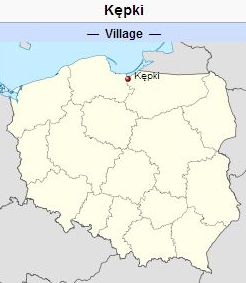 Zeyer was established during the Prussian period and was known as Sura. Later, it was granted the Chełmno Charter (Kulm Law, a legal constitution for a municipal form of government) by the Teutonic Knights and became a part of the Elbląg land estate. Until 1772 Zeyer was part of the Kingdom of Poland. The First Partition of Poland in 1772 resulted in the creation of a new province in 1773, called West Prussia, in which Zeyer was located. Zeyer was situated in the district (Kreis) of Elbing until the establishment of the Free City of Danzig in 1920. The village came under the control of Nazi Germany during World War II until February 1945, when it was occupied by Soviet forces and returned to Poland. In 2012 Zeyer (now Kępki) was a village in the administrative district of Gmina Nowy Dwór Gdański, within Nowy Dwór Gdański County, Pomeranian Voivodeship.

A ferry crossing the Nogat River functioned in the village since the Middle Ages until 2006, when a bridge was completed. The church, which was erected in the 14th century, was replaced by a half-timbered church in 1663. The village was primarily a fishing and a ferry crossing village.

Mennonites who were residents of Zeyer were members of the Rosenort Mennonite Church.