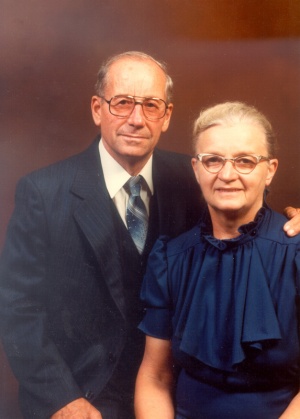 Vernon B. Zehr: farmer and churchman; born 24 November 1920 in East Zorra Township, near Tavistock, Ontario, to Daniel Zehr and Annie (Brenneman) Zehr. He was the oldest child in a family of eight. Vernon died 17 August 1999.

Vernon grew up in an Amish Mennonite deacon's home in the 1930s depression years and was a conscientious objector during World War II, working on his parents' farm. Vernon did not attend high school, college or seminary but read extensively and in later years took correspondence courses from several colleges.

On 14 March 1943 Vernon married (Vera) Katie Bender, and moved to a neighboring 60 acre farm, where they had cows, laying hens, and apple trees which became their major source of income. Vernon and Katie raised six daughters on this farm and provided them with more educational opportunities than they had experienced. Vernon also sold chicks for a local hatchery, keeping him in touch with neighbors.

On 27 July 1958 Vernon was chosen by lot to serve as pastor in his home congregation, Cassel Mennonite Church. In 1973 Vernon accepted a call to pastor Steinmann Mennonite Church, moving from the farm into New Hamburg, serving there until 1983. Vernon then served as short-term Interim Pastor at Poole Mennonite Church. From 1984-1990 Vernon served as pastor at Shantz Mennonite Church. For the next three years Vernon preached in many churches, and served as a volunteer assistant chaplain at Nithview Home, but in December 1993 a massive heart attack limited his activity.

After his ordination, Vernon found himself between two factions of Ontario Amish Mennonite Conference leaders—the "old guard" of pastors who resisted change, and the "young intellectuals" who could hardly wait for major changes. Because Vernon was not clearly identified with either side he was able to serve effectively as treasurer, then moderator, and later on the Personnel Committee, totaling 15 years on conference executive. The conference became Western Ontario Mennonite Conference (WOMC) in 1963.

Vernon also became involved in the broader church. In 1961 Vernon was elected as the vice-chair of the Non-Resistant Relief Organization. This organization, with other Canadian Mennonite relief organizations, agreed to cooperate in forming Mennonite Central Committee Canada in 1962. Vernon represented the Western Ontario Mennonite Conference on the first board. Vernon felt inadequate in this role but learned much from veterans like J. J. Thiessen,  J. B. Martin, Ernie Swalm and young intellectuals like Frank Epp and Newton Gingrich, and he became acquainted with Christian brethren from Ontario to British Columbia.

In 1975 Vernon began an eight year term on the Mennonite Church General Board. He also served several years on the board of Mission Services of London, a Men's Mission begun by Alvin N. Roth in 1951.

In 1968 Vernon was a charter member of a board set up by the Western Ontario Mennonite Conference to build a new nursing home. This was the beginning of the Tri-County Mennonite Homes organization, which in 2006 operated Nithview Home, opened in 1972 in New Hamburg; Greenwood Court opened in 1994 in Stratford; and Aldaview Home and Services for developmentally challenged adults in New Hamburg. Vernon served on this Board twelve years, the last four as chair, and later as a volunteer fundraiser.

Vernon distinguished himself as a preacher and was frequently invited to preach at funerals. Vernon was a self-educated man, molded by the Holy Spirit, and made significant contributions to his community, the local and broader church.

Zehr, Vernon. Reflections of an Era That Has Ended. New Hamburg, ON, 1982.