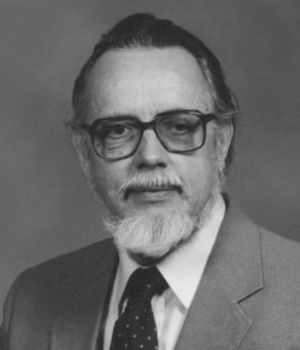 John Howard Yoder: theologian and Christian ethicist, was born 29 December 1927, just outside of Smithville, northern Ohio, the son of Howard C. Yoder (7 October 1897-29 October 1983) and Ethel (Good) Yoder (5 April 1903-20 June 1992). He was raised with one sibling, a younger sister, Mary Ellen (a younger brother died in infancy). He grew up as part of the Oak Grove Mennonite Church and from the age of seven lived in the nearby town of Wooster. Yoder stood in a line of several generations of influential leaders within the Mennonite Church from both sides of his family. It was obvious from an early age that John also had extraordinary gifts, especially intellectual gifts. By the time of his death in South Bend, Indiana on 30 December 1997, Yoder was arguably the most influential Mennonite theologian ever; he was also one of the most influential Christian ethicists in the 20th century.

Yoder attended Goshen College, a Mennonite college (Indiana) in 1945. He graduated with a B.A. in two years in 1947. Two of his teachers were especially important. Only one year earlier Guy Hershberger’s book, War, Peace, and Nonresistance was published and, perhaps even more importantly, Harold Bender’s presidential address to the American Society of Church History, "The Anabaptist Vision," had been published. For centuries the 16th-century Anabaptist movement had been defined negatively by church historians. Bender’s essay—an exciting re-interpretation—served to inspire a commitment to discipleship, Christian community, nonviolence, and service among a generation of Mennonites. For those academically inclined, it also served as a call for further research by Mennonites into the Anabaptist origins of their denomination. Conveniently, Bender had, in 1927, founded The Mennonite Quarterly Review, an academic journal which provided a forum for serious research on 16th-century Anabaptism and contemporary Mennonite life and theology.

John Yoder was among those who were inspired to give service to his church and through it to the world. In April 1949 Yoder began an assignment with Mennonite Central Committee (MCC) in France. His initial assignment was to do youth work and to help the French Mennonites recapture their commitment to pacifism. Soon Yoder’s daily work was overseeing first one and then two children’s homes, providing food and shelter and homes for children made orphans by the war. Additionally, Yoder also worked at healing divisions within French Mennonite churches. A history of French Mennonites says of Yoder that "few men will have exercised such a profound influence in [the churches’] transformation in this post-war period." Yoder was also, almost from the time he arrived, involved in ecumenical discussions about peace throughout Western Europe.

Yoder's lectures and essays written while in Europe set the stage for much of his life's work. He wrote about Reinhold Niebuhr, Karl Barth, the Christian witness to the state, ecumenical relations, and "the politics of the Messiah." On 12 July 1952 Yoder married French Mennonite Anne Marie Guth. Between 1953 and 1969 they had seven children, six of whom survived infancy: Rebecca, Martha, Elisabeth, Esther, Daniel, and John David. In 1957 Yoder and his family moved to the United States. (After his doctoral thesis was published, in 1962, Yoder received his Dr. Theol., in 1964, insigne cum laude). For the first year they were in the USA Yoder worked in one of the family-owned greenhouses. During 1958-1959 school year Yoder served as a sabbatical replacement at Goshen College. Beginning in the autumn of 1959 Yoder worked full-time as an administrative assistant for overseas missions at the Mennonite Board of Missions (MBM) in Elkhart, Indiana. From the beginning of his tenure at the mission board he initiated contacts with evangelical leaders, the National Association of Evangelicals, and the National Council of Churches. Over a period of more than 20 years, beginning in 1961, Yoder worked in various capacities with the World Council of Churches. From 1965 to 1970 Yoder was an associate consultant with MBM.

Yoder wrote hundreds of articles in five languages, as well as more than 17 books. (The number of posthumous books has swelled.) The heart of John Yoder’s thought is captured in six of his books: For the Nations, The Royal Priesthood, The Priestly Kingdom, Nevertheless, The Christian Witness to the State, and The Politics of Jesus. The Politics of Jesus has been translated into 12 languages, sold more than 100,000 copies, and influenced many Christians, both academic and otherwise. Jim Wallis, editor of Sojourners magazine wrote: "John Yoder inspired a whole generation of Christians to follow the way of Jesus into social action and peacemaking." J. Philip Wogaman, in his book, Christian Ethics: A Historical Introduction, named John H. Yoder as one of a handful of the "formative Christian moral thinkers" of the 20th century.

In 1991, eight women brought formal complaints of sexual misconduct against Yoder. As a result, Yoder’s home congregation, Prairie Street Mennonite Church, appointed a task force to investigate the allegations. After a year of work, the task force concluded that "the charges brought by the women are accurate, and John has violated sexual boundaries." Moreover, said the official press release, Yoder "has acknowledged the truth of the charges and has expressed deep regret for the hurt his actions have caused for the women." On 27 June 1992 the Indiana-Michigan Conference of the Mennonite Church began a process of formally disciplining Yoder. Yoder submitted to this process, which would last a little over four years. As a part of the process, Yoder acted to cut off any ongoing relationships that were deemed inappropriate and agreed not to pursue any new ones. He also agreed to undergo therapy "to work thoroughly with the issues involved." In the summer of 1996 the discipline process concluded successfully, with the Church Life Commission and the Indiana-Michigan Mennonite Conference saying that they encouraged "Yoder and the church to use his gifts of writing and teaching." The semester before he died he once again taught a course at Associated Mennonite Biblical Seminary.

Beginning in 2013 there was a call to re-examine the process by which Yoder was disciplined by the Mennonite Church in the 1990s. By August 2013 a Discernment Committee had been formed by Mennonite Church USA and the Anabaptist Mennonite Biblical Seminary, where Yoder had taught, initiating a formal investigation into Yoder’s case. Among other things, the committee commissioned historian Rachel Waltner Goosen to write an essay examining the facts, with access to important, previously unavailable documents. The results of her research were published in the essay, “‘Defanging the Beast’: Mennonite Responses to John Howard Yoder’s Sexual Abuse.” It was published in The Mennonite Quarterly Review Volume 89/1 (January 2015): 7-80 (along with other essays on the theme of sexual abuse and the Mennonite Church). Some conclusion learned from this detailed essay include: (1) the number of women hurt by Yoder’s harassing and abusive behaviors was much larger than many had imagined; (2) the realities and needs of the victims were barely considered in the discipline process of the 1990s; (3) there was extensive failure on the part of all the relevant institutions (implicating especially certain key figures). In addition to the valuable essay by Waltner Goosen, the most extensive examination to date of how Yoder’s behaviors fit with his overall theology (including an extensive bibliography) is: William Joseph Hutto, “Neither Grand Nor Noble: An Overview and Appraisal of John Howard Yoder’s Sexual Politics,” Ph.D. Thesis, The University of Aberdeen, 2018.

Yoder, John Howard. Anabaptism and Reformation in Switzerland: An Historical and Theological Analysis of the Dialogues Between Anabaptists and Reformers. Edited by C. Arnold Snyder; translated by David Carl Stassen and C. Arnold Snyider. Anabaptist and Mennonite Studies, 4. Kitchener, ON: Pandora Press, 2004.

Yoder, John Howard. Christian Attitudes to War, Peace, and Revolution: A Companion to Bainton. Elkhart, IN: Distributed by Co-op Bookstore, 1983.

Yoder, John Howard. Karl Barth and the Problem of War, and Other Essays on Barth. Edited by Mark Thiessen Nation. Eugene, OR: Cascade Books, 2003.

Yoder, John Howard. What Would You Do? A Serious Answer to a Standard Question. Scottdale, PA and Kitchener, ON: Herald Press, 1983, 1992.

This article is based on the original English essay that was written for the Mennonitisches Lexikon (MennLex) and has been made available to GAMEO with permission. The German version of this article is available at http://www.mennlex.de/doku.php?id=art:yoder_john_howard