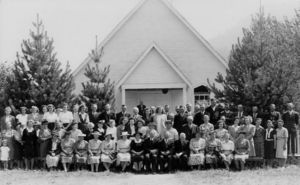 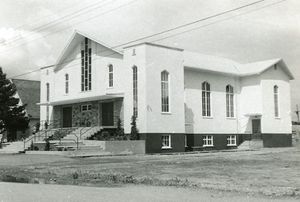 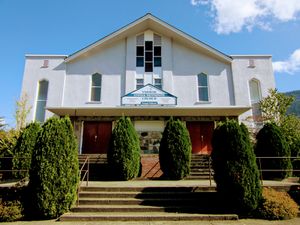 Mennonites in Yarrow (now a part of Chilliwack), British Columbia began services in 1928 when the first Mennonites moved to the area. United Mennonite and Mennonite Brethren families gathered together for worship in various homes until the summer of 1928, when a one-room elementary school was built in Yarrow and the school board gave the Mennonites in Yarrow permission to use the school for their worship services. When a second one-room school was built in Yarrow, the two groups separated and held their own worship services. United or General Conference Mennonites organized their first church in Greendale, First Mennonite Church Greendale, in 1931, and in the early years families from both Greendale and Yarrow formed one church with two separate locations.

Yarrow United Mennonite Church (initially called Vereinigte Mennoniten Gemeinde zu Yarrow) formally organized on 25 October 1938 with the assistance of N. W. Bahnmann from Coghlan. J. J. Klassen became the first pastor of the church. The first building was occupied in 1938, with a dedication service held on 16 October 1938 in conjunction with a Harvest Thanksgiving service. The congregation grew rapidly in the late 1940s and early 1950s due to a major influx of Mennonites and others from Russia and West Prussia after World War II.

When the Conference of United Mennonite Churches of British Columbia organized in 1936 and incorporated in 1940, Yarrow sent delegates. They joined the General Conference Mennonite Church of North America in 1938 and in 1939 Yarrow officially applied for membership in the provincial conference. Yarrow hosted the formation of the BC Mennonite Women’s Conference in 1939 and in 1940 held a Bible school in the church. In 1941 records show that they had a deacon on the Ministers and Deacons committee of the BC Conference. By all accounts the congregation was quite active in the late 1930s and 1940s.

Yarrow United Mennonite Church continued to grow in worship attendance, and in 1940 the church building was expanded. By the early 1950s membership stood at 210 and plans were made to build a new sanctuary. The new church was dedicated on 21 June 1959 and in October 1963, while celebrating its 25th Anniversary, the mortgage papers for the ten year mortgage were ceremonially burned.

While a number of Yarrow families moved away to larger cities after a few years, in September 1988 the congregation celebrated its 50th anniversary with 113 official members. In the congregation’s 50 years of existence there occurred 165 marriages, 275 baptisms and 150 deaths. The lack of work opportunities in more recent years has resulted in a reduction of members from a high of 201 members in 1956 to 63 in 2010.

Yarrow United Mennonite Church continues to worship in the more traditional style. Praise and Worship on Sunday morning is led by a variety of people who lead in the singing of hymns as well as older and more contemporary chorus arrangements. Singing is done with piano accompaniment and also a cappella. In addition to the pastor, lay people also lead the worship services.

Churches in Profile. Abbotsford, BC: Conference of Mennonites in British Columbia, 1978: 109-113.