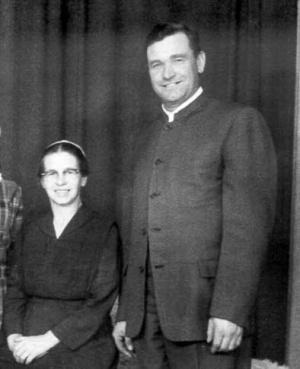 Henry Yantzi: farmer and bishop; born 12 December 1913 in East Zorra Township, near Tavistock, Ontario, to Daniel and Catherine (Schlegel) Yantzi. He was the youngest and only son in a family of three children. On 14 October 1936 Henry married Lily Mae Schwartzentruber (28 May 1912-27 November 1997). They had seven children and parented two foster sons. They lost their eldest daughter to tetanus at the age of five and a teenage son in a winter traffic accident.

Henry grew up in an Amish Mennonite (A. M.) home which emphasized hymn singing, devotion to God and loyalty to the church. Early in life he learned to carry responsibilities not shared by many of his peers. At the age of 15 his father died; at the age of 27 he was called to the ministry; and at the age of 34 he was ordained a bishop.

On 16 July 1940 Henry was ordained by lot to serve as a deacon in his home congregation, the East Zorra Amish Mennonite Church. By consent of the church he was ordained a minister on 12 October 1947 and seven months later he was chosen by lot and ordained as bishop (30 May 1948 by Samuel Schultz and Moses Jantzi, Bishops in the Ontario A. M. Conference)

The Ontario Amish Mennonite community was not insulated from the huge cultural and social changes of the post-World War II era. Many challenged the traditional attitudes toward nonconformity in dress, separation from the world and higher education. Pressured by both the liberal and conservative factions in the congregation and conference, Henry mediated between strident voices with his characteristically soft-spoken, gentle manner.

Henry helped to broaden horizons on many fronts and gently negotiated changes in the church. He advocated a more relaxed church discipline, the revival movement, home and foreign missions and abstinence from alcohol and tobacco. Largely through his influence the East Zorra Congregation replaced wine with grape juice at communion. He taught at the first Summer Bible School in 1940 and served as it's director from 1941-1959.

As bishop of the largest A. M. congregation in Ontario meeting in several locations, Henry rotated between East Zorra, Cassel and Tavistock. In 1961 he was stationed at Tavistock. At a particularly difficult time in their journey, he held oversight of the Poole A.M. Church. In 1964 he became the founding pastor of Hillcrest where he served until 1976. He also pastored Mennonite congregations in Glen Allan (1976-1979), Hunta (1989-1990), Dungannon, and Rainham. In the 1980s Henry and Mae also assisted with the church planting efforts in Brantford. He officiated at about 500 baptisms and hundreds of weddings and funerals.

Although not privileged to attend high school, Henry promoted and taught at Winter Bible Schools throughout the Conference. He was the first representative from the Ontario Amish Mennonite Conference on the Rockway Mennonite School Board. As longtime Moderator he also represented the Ontario AM Conference at the denominational level of the Mennonite Church.

Henry saw the need for more educated leadership and by the late 1950s he encouraged more consistent financial support of pastors. Often pulled away from his own farm by the demands of ministry, the Yantzi family knew first hand the economic and personal sacrifices which were asked of the families of self-supporting farmer-preachers.

Along with fellow Bishops Orland Gingerich and Ephraim Gingerich, Henry was very supportive of the pioneering group of young men and women from the Ontario A. M. Conference who had responded to "a call to full time Christian service" given by evangelists such as Howard Hammer (e.g. Mary Jane Brenneman, Ralph Lebold, Herb Schultz, Dale Schumm, Lorraine Roth Vernon Leis, Ken Bender). Henry and other conference leaders encouraged this group to prepare for missionary and pastoral service by getting a good theological education. Missionary Nelson Litwiller encouraged and supported these bishops in this endeavor. During this time the conference established a fund to subsidize these students.

By the 1950s the use of the lot for choosing new leaders became problematic for Henry who wanted to promote younger leaders with theological training. In 1956 an attempt in the Tavistock congregation to ordain a recent seminary graduate, Ross Bender, resulted in conflict between traditionalists who favored the use of the lot and progressives who favored more educated leaders. Henry became the focus of harsh and disheartening criticism.

In the early 1960s Henry advocated allowing all ordained ministers to officiate at communions, baptisms and weddings. These had previously been the prerogative of bishops. He and his fellow bishops in the A. M. Conference (Ephraim Gingerich, Orland Gingerich and Christ Streicher), voluntarily extended this authority to the pastoral leaders in each congregation. This lessened their workload and helped to usher in the era of Conference Ministers.

Interested in broadening the church's welcome, Henry was an early voice for compassion and flexibility as the church faced the controversial issue of divorce and remarriage in the early 1970s.

In her youth Lily Mae attended the Ontario Mennonite Bible School and dreamed of serving "on the mission field." With the ordination of her husband in their home congregation, Lilly Mae began a life time of sharing in Henry's ministry and exercising her gifts in teaching and hospitality. Not until their call to Glen Allan and Hunta did she sense that her dream of serving beyond her home community was being realized.

At the time of his death on 12 July 1995, Henry was Pastor Emeritus at the Hillcrest Mennonite Church. Lily Mae died on 27 November 1997. They are buried at the East Zorra Mennonite Cemetery.