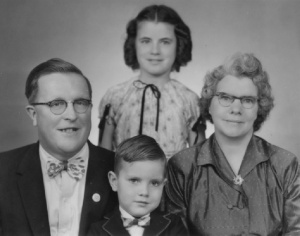 Edwin John Wright: first minister of non-Dutch/Germanic descent to serve within the Evangelical Mennonite Conference; born 21 September 1913 in Cardiff, Wales. He married Violet Mae Gillespie (1918-1999) on 5 May 1942 and they had three children. Wright died in 1994.

Edwin came to Canada in 1928 as a 15-year-old. He became a Christian in Canada, and trained as a minister at Lorne Park College, a Free Methodist institution in Toronto, Ontario. In 1939 he moved to Hassan, Saskatchewan, as a church planter under the Christian and Missionary Alliance. The next year he started services in Sturgis, Saskatchewan. He pastored churches at Vermillion, Alberta, and Sturgis, Saskatchewan, and started the Crystal Lake Bible Camp in the 1940s. Edwin Wright met Rev. Ben D. Reimer, director of the Western Gospel Mission, and, with no suitable Alliance positions open, Edwin and Violet entered the Western Gospel Mission in 1955.  Wright served at Canora, Saskatchewan, and then started the work at nearby Endeavour (1960-1966). In 1965 the Endeavour congregation was received into the conference while Edwin was its pastor. Wright then served at Riverton Gospel Chapel from 1966 to 1969.

A half-century earlier Edwin John Wright’s involvement would have been unlikely. In 1899, Kleine Gemeinde ministers were suspicious of other preachers and did not want members to attend outside meetings unless accompanied by one of its ministers. A Welshman preaching in English would not qualify to be heard, let alone serve.

Questions remain unanswered. Did Edwin and Violet Wright ever feel lonely when people spoke Low German? Did individuals question whether they fit into the conference because of their last name? Perhaps the Western Gospel Mission was circumspect in how it used language. Some Western Gospel Mission leaders viewed the term Mennonite as an obstacle.

Was Edwin Wright a pacifist? Only aged 25 when World War Two began, he was perhaps exempted as a minister from military service; he both served as a pastor and married during the war.

Wright later continued in ministry outside of EMC circles, pastoring in Arborg, Manitoba, and Carrot River, Saskatchewan. He working actively for the Lord till his death after a short illness in 1994. The funeral service was held on 19 October 1994 at Sturgis Evangelical Church with Pastor Gary Semenyna officiating.

Violet died on 16 August 1999 at the hospital in Preeceville, Saskatchewan. She was a person of many interests in retirement: reading, music, horticulture, and poetry.

Both Edwin and Violet were respected and beloved; their obituaries appeared in the EMC’s magazine long after their formal conference involvements had ended.