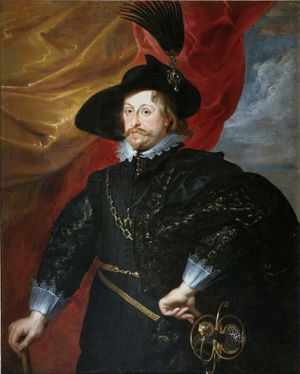 In 1610, at the age of 15, Wladyslaw was elected Vladislav I, Tsar of Russia by the Seven Boyars. However, his father refused to send his son to Moscow and have him convert to the Orthodox faith. Instead, Sigismund proposed that Wladyslaw reign as a regent. The Russian leaders refused this proposal and Wladyslaw was deposed in November 1612. In 1613 Michael Romanov was crowned Tsar of Russia. Wladyslaw tried to regain the throne with a military campaign in 1616 but was defeated. He held on to his claim to the Russian throne until 1634.

After his father's death, Wladyslaw was elected king and reigned as King of Poland from 8 November 1632 until his death in 1648. As king he was successful in defending the Polish-Lithuanian Commonwealth against invasion by foreign forces, particularly during the Somlensk War of 1632-34. Wladyslaw was a supporter of religious toleration in Poland and was a renownded patron of the arts.

It appears that King Wladyslaw was not familiar with the rights that Mennonites had obtained in his kingdom under previous kings. In 1642 the King's chamberlain, Willibald von Haxenberg, was able to obtain a document from King Wladyslaw. It stated that because the Mennonites had slipped into Poland without permission and had caused great impediments in the business affairs of Polish subjects, all Mennonite property was to be seized by the national treasury. The king, in turn, made a gift of the seized property to von Haxberg. Von Haxberg proceeded to try to extort money from the Mennonites, initiated a military occupation of their land, and was successful in raising taxes from the Mennonites for his own benefit. Prussian government representatives interceded and reminded the king of the privileges that had been granted to the Mennonites in the past.

On 22 December 1642 Wladyslaw granted the following privilege, stating that all the privileges granted by King Sigismund Augustus would continue “from this time and for all times.” The royal proclamation also made reference to a payment made by the Mennonites to the king. The document acknowledged that the Mennonites had been invited by the van Loysen brothers to settle in the region and that the king at the time had approved of their settlement. They settled on uncultivated and useless lands and made them useful and fertile through hard work and great expense. The Mennonites accomplished this by the eradication of shrubs, by building pumps necessary to drain the water off the marshy and inundated lands, and by building dams, built to prevent inundations from the Vistula, Nogat, Drausen, Haff, Tiege and other streams. They have left an example of singular diligence, hard work at great costs for their descendants to follow.

Wladyslaw was succeeded by his brother, John II Casimir.