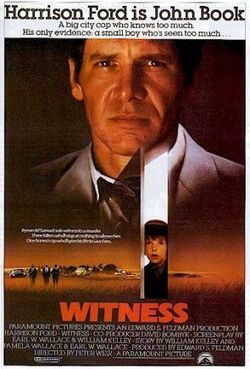 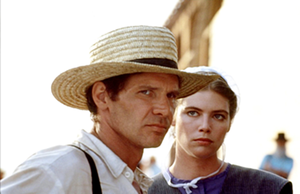 Witness, English language, color, 35 mm film, distributed by Paramount Pictures, USA, released 8 February 1985, 112 minutes, aspect ratio: 1.85 : 1, Directed by Peter Weir. The film has been released in VHS, DVD, and in a Collector’s Edition and also dubbed into more than two dozen languages. Most filming was in Lancaster County, Pennsylvania.

Witness is a fictional American crime thriller film which features a love story, a thoughtful study in comparative Amish and American cultures, and a respectful exploration of a nonviolent Amish religious community. Witness has been described as one of the high points of 1980s American cinema, and remains one of Australian director Peter Weir’s best films. It won two Academy Awards for Best Original Screenplay and Best Film Editing and several other film awards. It was viewed worldwide and was both a commercial and critical success.

In a Philadelphia train station Samuel Lapp, an 8-year-old Amish boy, witnesses a violent murder. With his mother Rachel, a young Amish widow, Samuel meets with Detective John Book about the murder and the detective learns that another detective is likely involved. Book confides this to his superior officer who advises him to keep the case secret. While in a parking garage Book and the Amish are attacked, Book is wounded, the attacker escapes, and Book realizes his superior is part of a murder conspiracy. Book and the Amish flee to the Lapp home farm in rural Lancaster County, Pennsylvania. Here Detective Book passes out from his injuries.

Warned of the ability of corrupt police to trace hospital records, the Lapps somewhat reluctantly nurse Detective Book slowly back to health at their home. Book and Rachel develop an affection for each other which is disapproved by Rachel’s father-in-law, Eli. Book dresses in Amish clothing and participates in farm life as he can. Book’s relationship with the Amish community grows as they learn he is skilled at carpentry and soon he is invited to participate in a barn raising for a newly-married couple. Here he gains the respect of some Amish. Though attracted to each other, Book realizes that if he and Rachel become involved either he would have to stay or Rachel would have to leave.

Book next goes into town with young Eli to use a payphone and is informed that his Detective partner has been killed. He correctly determines that the corrupt police are still actively looking for them. In town, some Amish men are harassed by locals. Breaking with the Amish tradition of nonviolence, Book retaliates. The fight is reported to the local police, and Book realizes that his violence will reveal their location to the corrupt police. Knowing that they must leave, Rachel is informed by Eli that they all know that leaving it is the right thing to do, but she is upset at the news. When she is alone she removes her bonnet and goes to Book and they embrace.

The next day, three armed corrupt police officers arrive at the Lapp farm. Book orders Samuel to run to the neighbors' for safety. A fight at the farm ensues. One villain is suffocated in a corn silo and Book kills a second. The third, Book’s superior, captures Book and Eli, the father-in-law. Eli signals to Samuel, who had returned unseen to ring the farm’s warning bell, and the loud clanging summons many other Amish to the Lapps. With so many witnesses, Book’s corrupt superior realizes he can't escape and gives up. The local police converge at the Lapp farm and arrest this last villain. As Book prepares to leave, he says goodbye to Samuel, Rachel, and Eli. Eli, in turn, who has now grown to appreciate him, wishes him well "out there among the English."

Some critics felt that the director, Peter Weir, in this film helped the America public discover and appreciate the Amish community. As a piece of film art Witness alternately examines the "English" world through Amish eyes and the Amish world from the perspective of an outsider. One of the differences is that Amish life is depicted as serene but human, the outside world as rather grim. On several levels it provides a series of contrasts: the violence of Book’s world and the principled nonviolence of the Amish, the dark urban environment and the bright green Amish countryside, the similar dressed but subtle differences between the young Amish boy and a Hasidic Jewish gentleman. The film portrays Amish life as real and satisfying, and avoids the condescending attitudes of earlier depictions of religious communities. It neither sentimentalizes its subjects, nor does it make their unusual ways seem quaint or humorous. Witness is an artful tribute to a way of life that emphasizes community and cooperation, hard work, practicality, integrity, and responsibility.

The film had a considerable impact in the entertainment industry. The 2003 Bollywood film Paap is a remake but set in India with a Buddhist community in place of the Amish. About 50 subsequent films and television episodes contain references to Witness and over half a dozen others contain scenes or references that spoof the film. Clips of the film are frequently shown when the actors or director are interviewed and a documentary film, Between Two Worlds: The Making of "Witness" was produced in 2005 and is featured on the Special Collector’s edition DVD of Witness.

The film Witness generated more controversy in Mennonite circles that any other film. The venerable Professor John A. Hostetler, the premier sociologist of the Amish and a person from an Amish family, was a leading vocal critic of the film, pointing out its flaws and encouraging people to boycott the film. In this activity he became both a celebrity and a victim of criticism himself. He criticised the film for violating the Amish virtues of modesty and humility by making them central objects in a commercial hedonistic Hollywood film. The film also violated the Amish’s desire not to be photographed. In response people pointed out that Hostetler himself used many photographs of Amish in his books and that he made significant financial gain in book royalties from writing about the Amish.

Many feared that the Amish, already bothered by tourists, would be overrun, trespassed upon, and seriously vexed. Further, in response to criticism, those associated with the film pointed out that it is not a documentary about the Amish but a fictional film story featuring them. As fiction and art, the film is not necessarily accurate. For example, Witness shows Amish singing a hymn at the end of barn building. In truth Amish never sing after such work, but in the story the Director wanted to make a joyful ending to the barn construction so he used the device of singing. The scene where the young Amish widow exposes herself to the visiting Detective was criticised as unbelievable for Amish are renowned for their modesty as demonstrated by their clothing. Critics responded by pointing out that court records demonstrate that Amish have had their share of sex crimes and sexual deviants and after all they are only human.

The story narrated in the film was released as a paper-bound book as: