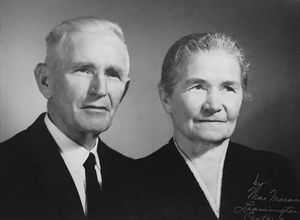 Heinrich Winter was baptized on the confession of his faith on Pentecost, 1915 by Ältester Isaak Dyck and was accepted into the Chortitza Mennonite Church. As a young man he worked in the family's agricultural pursuits. During World War I he served as a medical orderly.

He was elected as preacher for the Chortitza Mennonite Church on 12 February 1923 and was ordained on 4 November 1923 by Ältester Peter Neufeld. The next years, despite widespread emigration of others in the Chortitza settlement to Canada, were happy years for the Winter family. But collectivization of the farms beginning in 1929, and being stripped of citizenship rights since Heinrich was a minister, led to very difficult, uncertain years for Heinrich and Katharina Winter. Twice he was arrested for brief periods of time, and on 27 April 1935, on the Saturday before Easter Sunday, Heinrich Winter was arrested and in the trial which followed, was sentenced to five years of exile in Siberia.

After five difficult years in distant work camps, on 3 May 1940 Heinrich Winter returned home to Chortitza. He found the churches with their doors locked, the congregation without a voice, and a ban on all preaching. However, a year later, World War II reached Chortitza, and on 18 August 1941, it came under German occupation. Minister and deacon elections were held in all villages, and soon there were regular church services again. In 1942 Winter officiated at baptismal and communion services. In January 1943 he was elected to the position of Ältester of the Chortitza Mennonite Church, though he was never formally ordained to the role. It had always been tradition that, wherever possible, the Ältester took on the task of baptizing new believers. For six years there had been no baptisms at all, and now the groups became very large. On two occasions, the number requesting baptism exceeded 100.

However, in fall 1943 the whole community quickly prepared to flee to the West because of the retreating German military front. Sadly, by the end of the war, two-thirds of the Chortitza congregation had been sent back to the Soviet Union, where many died of hunger and mistreatment. About a third of the group, including the Heinrich Winter family, made it safely to West Germany.

Shepherding this refugee church in Germany during 1943-48 required much energy and dedication. Heinrich Winter organized church services and catechism instruction, and made trips all over Germany on overcrowded trains for baptismal services. Another difficult reality that he was forced to deal with were the many divided and separated families. Here it was his task to offer comfort from God’s word where possible and to weep with those who wept.

Through the efforts of the Mennonites of the USA and Canada, most of the Mennonite refugees emigrated either to Paraguay or Canada. The Heinrich and Katharina Winter family was able to enter Canada in June 1948 and went to the home of Heinrich’s brother, David, near Altona, Manitoba. However, their daughter Lena and husband were settled in Leamington, Ontario, so the family moved to this area in November 1948 because it offered more work opportunities. In 1949 they joined the Leamington United Mennonite Church, and Heinrich was soon approved by the membership to serve as a minister.

Heinrich Winter visited many immigrant refugees who were scattered throughout Canada in those post-war years, and in late 1950 undertook a three-month trip that extended from British Columbia to Manitoba. In 1952 the family purchased a 50 acre farm, and in 1954 Heinrich and Katharina's son, Henry, was ordained to pastoral ministry for the Leamington congregation.

On 27 June 1976 the Leamington United Mennonite Church celebrated the golden anniversary of the ministry of Heinrich Winter. His years of ministry divided into two 25 year parts: the first in the Ukraine and the refugee church in Germany and the second in Leamington. The church told Heinrich Winter, “Please know that your work in the Lord is not in vain. We thank you!”

Winter, Henry. "Heinrich and Katharina Winter." In Biographies of our late leaders and histories of the Mennonite Churches in Essex and Kent Counties, 1925-1995, edited by Gisela Schartner and Astrid Koop. Leamington, Ontario: Essex-Kent Mennonite Historical Association, 1995: 128-132.