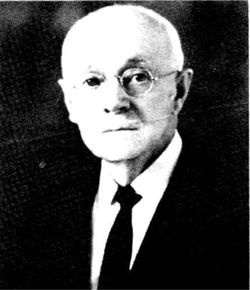 The Winnipeg German Bible School existed for about a decade from 1930 to 1939. The first reference to such a school comes in the North End Mennonite Brethren Church minutes in January 1931. The first instructor was Abram B. Peters (1860-1959) who offered two hours of Bible instruction on Thursday evenings, primarily for Mennonite young women who were associated with the Mary-Martha Home.

In 1933 significant steps were taken to expand the school. In March a society was organized and Cornelius A. DeFehr was elected chairman. A. B. Peters and Franz C. Thiessen were appointed teachers and courses were to be conducted five evenings per week. Retention of the German language was emphasized and non-Mennonite Brethren German-speaking groups were invited to participate. Other teachers appointed included Franz F. Klassen and Esther Horch.

Daytime instruction was added and enrollment reached a peak of 58 in 1934. The introduction of a three-year program was envisioned. Although enrollment remained relatively constant for several years, the continued growth and viability of the school was soon in question. By 1939 the demise of the school was obvious, although some evening courses continued to be offered for several years.

In some respects the Mennonite Brethren Bible College which began in 1944 could be seen as a successor to the Winnipeg German Bible School. C. A. DeFehr was instrumental in the establishment of both, and Esther Horch was an instructor at both institutions.