From GAMEO
Revision as of 22:31, 7 November 2016 by SusanHuebert (talk | contribs)
(diff) ← Older revision | Latest revision (diff) | Newer revision → (diff)
Jump to navigation Jump to search
A checked version of this page, approved on 17 November 2016, was based on this revision. 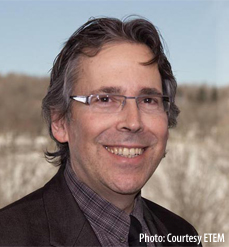 Éric Wingender: pastor, theologian and professor for the Mennonite Brethren; born 22 November 1956 in Saint-Eustache, Québec, Canada to Noël Wingender (1914-1980) and Madeleine L’heureux (1920-1992). Éric was raised in a French-speaking Roman Catholic household with two brothers (Richard and Pierre) as well as two sisters (Pierrette and Annie). In April 1982, he married Paulette (Farrah-Chanel) Taylor and together they raised three sons: Jean-François, Sydney and Spencer. Éric Wingender died suddenly in Montreal, Québec on 5 October 2011.

Following the example of his elder brother Pierre and guided by Ernest Dyck, a Mennonite Brethren (MB) missionary and pastor of the Église des Frères Mennonites de Sainte-Thérèse, Éric experienced a conversion and was baptized in 1972. His experience combined with that of many others in the Quebec revival of the 1970s, and like many of his student friends, he became part of the development of the growth of the Mennonite Brethren in Quebec. Along with his brothers and his mother he participated in a local Bible study that eventually became the Saint Eustache congregation.

Éric first did university studies in the sciences, obtaining a BscA at l'Université Laval in 1982, followed by several years working in bio-agronomy (1981-1985). Gradually he steered towards Biblical Studies in order to work in evangelical ministry. In 1988, he obtained an MDiv at Mennonite Brethren Biblical Seminary in Fresno, California.

Not finding an opening to teach in the Quebec Bible colleges, Éric accepted the pastorate of l’Église des Frères Mennonites de Sainte-Rose (1988-1990). Éric received his teacher's certificate and taught High School science (1990-1996). Finally in 1996, he was invited to become professor and registrar at l’Institut Biblique Laval (IBL), which later became École de Théologie Évangélique de Montréal (ÉTEM), in 2000. Promoted to Dean of IBL in 1998, Éric at the same time pursued further theological studies at l’Université de Montréal (already a partner of IBL). He began PhD studies there in 2002 while teaching at l’ÉTEM. His premature death came before completion of his thesis and without publication of a book. This did not prevent sizable contributions to theological reflection through his numerous sermons, lectures and articles as well as being assistant editor of the MB periodical Le Lien. His ideas were powerfully argued based on his vision of education and incarnational faith. He was a gifted speaker in both popular and academic circles. His students deeply appreciated his ability to tie together Anabaptism and the current Quebec situation. Hermeneutics and apologetics were central to his concern to communicate with young Québecers, especially outside the Church. His perfect bilingualism permitted him to be the face of the Quebec Church for Mennonite Brethren across Canada.

It was Éric's vision to become a partner of the l'Université de Montréal and to further this, he advocated a move to a beautiful building in downtown Montreal near their campus. It was also Éric that guided l’ÉTEM towards a partnership with the Christian and Missionary Alliance College, l’Institut Biblique VIE (IBVIE). His larger dream was to see the various evangelical colleges in Quebec cooperate in a common theological work. Not long before his premature death, he helped develop the new agreement between l'ÉTEM and l'Université Laval at the same time as he planned a new study program for young adults.

In his 54 years, Éric touched the lives of many with his faith in Jesus Christ, his gifted communication, his openness to hearing others, his vision and his joy.

Lougheed, Richard. "The Evangelical Revivals of the 1960s-1980s." In French-Speaking Protestants in Canada: Historical Essays, edited by Jason Zuidema. Leiden, The Netherlands: Brill, 2011: 191-206.