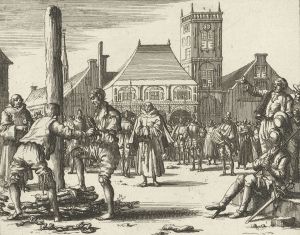 Willem Jansz (Janssen), also called "Spaansche Willem van Doornickendam," an Anabaptist mar­tyr, burned at the stake at Amsterdam, on 12 March 1569, together with Jan Quirijnsz and Cornelis Jansz. Willem was burned alive, without having been previously strangled as was usual.

The story of Willem's brotherly love, his loyalty, and his frankness is very striking; having heard that his coreligionist and friend Pieter Pietersz Beckjen was to die for his faith, Willem, who lived in Waterland, probably at Durgerdam, hastened to Amsterdam to comfort him. Standing near the place of execution he loudly called to Pieter: "Fight valiantly, my dear brother." Immediately afterwards he was arrested, put in prison, and tried on 26 and 28 February and 9 March 1569. During these trials he confessed that he had been (re) baptized about eight years before. He also admitted that he had sometimes preached "in the manner of the Mennonites." During the torture he did not betray his brethren, refusing to name them. He gave some information on the dissensions which had arisen among the Mennonites, a question which was only rarely raised in the trials of the martyrs. Willem informed the inquisitors that he had been banned by the party of Dirk Philipsz, i.e., the Flemish branch, because he had sided with the Frisians.

Because of his heresy, his frankness, and his un­willingness to be converted by the Catholic clergy­ men, he was sentenced to death. The sentence is published in full by van Braght in the Martyrs' Mir­ror. His property was confiscated.