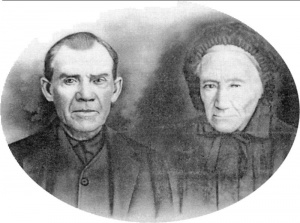 Isaak Wiens; pioneer blacksmith; born 7 April 1842 in Kronsthal, Chortitza Colony, Russia, to Jakob and Katharina (Klassen) Wiens as the fourth of eight children. His father’s collection of morality literature, historical documents, and teaching materials was well known in the community.

In Russia Isaac Wiens worked for years as a blacksmith and at one time employed six men in building wagons. In Canada the extended Wiens family settled on the Mennonite West Reserve. When the Canadian Pacific Railway wanted to build a rail line across Isaac’s land and name the station "Wiens," he knew that the Old Colony church would not approve of such apparent self-promotion, so Isaak traded his land with another farmer, Valentine Winkler, and the town that grew up later became known as "Winkler" instead of "Wiens." Isaac Wiens later joined the Sommerfeld Mennonite Church.

Working on the new tract of land, Isaak Wiens was soon the richest farmer in the area. Besides having an assessment twice as high as the average, Isaak also owned the only threshing machine in the village. By 1900, the family had moved to Rosenbach and owned three farms. Isaak’s wife, Aganetha, died in 1909. On 30 December 1909, he married Agatha Neufeld (1840-1916). After she died, he married Katharina Esau, who outlived him by 20 years. Isaak Wiens died on 8 October 1920 in Manitoba.