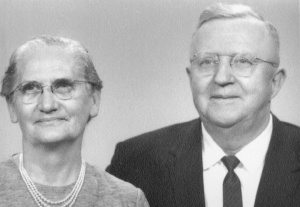 Wiens attended the Sparrau village school where he was instructed by Benjamin B. Janz. He continued his studies at the Halbstadt Zentralschule and later graduated with honors from the Halbstadt Kommerzschule.

On 6 July 1919 Abram was baptized and joined the Mennonite Brethren Church in Tiege, Zagradovka. On 20 October 1919 he married his stepsister, Anna Dueckman (1897-1994), also of Tiege, Zagradovka. These were civil war years which brought many hardships for the young family, especially since he served in the White Army and in the Selbstschutz.

Five children were born to Abram and Anna Wiens: Agnes, Henry and Anne in Ukraine; John and Ernest in Canada.

On arriving in Canada in 1925, the Wiens family settled in New Hamburg, Ontario. Wiens worked as a farm hand and factory laborer. In 1928 the family moved to Chortitz, Manitoba where they farmed. In 1942 they moved to Yarrow, British Columbia, where the family operated a small raspberry operation. In the early 1960s Anna and Abram Wiens retired to Abbotsford, British Columbia.

In BC Anna and Abram were finally able to continue the work they had already begun in New Russia, where they had been active in the American Mennonite Relief Program. Wiens became active in the Mennonite Relief Committee in BC, the Canadian Mennonite Board of Colonization, and in 1957 the BC government Relief program for Hungarian refugees. They helped to establish and coordinate the Mennonite Central Committee clothing depot in Yarrow after World War II.

Wiens was an early advocate for the establishment of a Canadian organization that would resemble the Mennonite Central Committee. In 1951 Wiens expressed the desire to see the amalgamation of the Canadian Mennonite Board of Colonization and the Mennonite Central Relief Committee. In 1958 he again pushed for the amalgamation of the two organizations, and in the following year the two agreed to form the Canadian Mennonite Relief and Immigration Council was formed, with Wiens serving as secretary.

In Yarrow, Wiens participated in the development of the Yarrow German Saturday school, chaired the Parent-Teacher Association of the Sharon Mennonite Collegiate Institute, and was a board member of the Yarrow Growers' Cooperative. Abram also became a representative from Western Canada on the board of the Bethesda Mental Hospital board in Vineland, Ontario. After his retirement, he took on the formidable task of organizing the B. B. Janz personal papers collection.