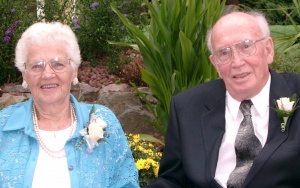 Bill and Louise moved to Abbotsford in 1947, where Bill began his long and significant involvement as a teacher and principal at the Mennonite Educational Institute (MEI). He was a strong advocate for academic studies, athletics, and especially for living out the Christian faith. Bill introduced physical education and extramural sports, particularly basketball, as a way of connecting the school with the community. Because of his desire to develop a healthy spiritual atmosphere in the school, Bill began annual “Spiritual Emphasis” weeks.

In 1962, Bill left Abbotsford to teach in Nigeria under the auspices of the Canadian International Development Agency (CIDA), and after two years, he returned home to teach at Aldergrove Secondary School. Shortly thereafter, CIDA appointed him to a four-year term at a teachers’ college in Singapore. Upon his return in 1971 he taught at Abbotsford Secondary School followed by a brief term at Trinity Western University before completing his teaching career with MEI (1980-1984).  He was also involved with a summer teacher education program with the Canadian Teachers Federation in Jamaica.

Bill and Louise were charter members of Central Heights Mennonite Brethren Church from 1950 until his death in 2006. Bill’s love of God and church were the foundation of his life and his deep faith inspired all who knew him. He served in many different positions of leadership in his home congregation and churches he attended abroad and in the Mennonite Brethren conference.  He deeply loved his family, taking pride in his daughters, and especially delighting in his grandchildren and great-grandchildren.  Louise was a constant support for Bill through her encouragement, her kindness and hospitality.  She worked primarily in the home, but was employed as a secretary while Bill pursued his Master’s degree.

In a life of teaching that spanned 36 years, Bill influenced thousands of students from grade one to university on three continents. He inspired colleagues and students alike, and his ability to transmit a love of math and physics is legendary. An important teaching philosophy of his is best illustrated by a meditation he shared during a staff meeting in his last year at MEI: he enthusiastically reminded teachers that each of them “is the key that will open the door” for some of their students to become all that God wants them to be. Bill opened many doors.  Bill often commented to his family that he truly enjoyed his teaching career and he couldn’t think of any student he had ever taught that he wouldn’t want to sit and have coffee with.