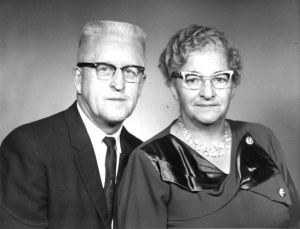 In 1904 Paul and his parents immigrated to Canada, settling in Main Centre, Saskatchewan. Here he was baptized in 1919 and joined the Main Centre Mennonite Brethren (MB) Church. Paul attended high school in Rosthern, and then in preparation for a teaching career, Normal School in Saskatoon, Saskatchewan. A series of drought years during the late 1920s and early 1930s reduced the prospects for a secure teaching future. Seeking a better future, the Wiebes moved to Foam Lake, Saskatchewan to begin a mixed cattle and grain farming operation. In Foam Lake Paul helped plant an MB congregation. It was also here that he was ordained to the ministry on 13 June 1943.

In 1944 the Wiebe family moved to Matsqui, British Columbia (BC) to continue farming in the Fraser Valley. A year later the Wiebes became charter members of the Matsqui MB Church. This church was strongly involved in Christian education and in outreach to the surrounding area and some communities north of the Fraser River. Sunday school was conducted in the village of Matsqui and chapels were constructed at Silverdale and McConnell Creek.

While still young man, Paul had studied at the Herbert Bible School. Now although unusual for his time, he found opportunity to study at the Multnomah School of the Bible in Portland, Oregon during the winter of 1945.

In early 1948 the Wiebes purchased 220 acres in Delta, BC where Paul excelled in dairy farming. Here he became a leader in the emerging Strawberry Hill (later Kennedy Heights) Mennonite Brethren Church. Towards the end of the 1950s, Paul and his wife moved to Vancouver, BC, where they assisted in organizing the Killarney Park MB Church, the third church plant in which Paul was involved.

Central to Paul Wiebe’s Christian faith was a commitment to mission work.  While living in Vancouver, he served for six years in the Central City Mission. In each of the churches of which he was a part, he promoted evangelistic outreach. As a further expression of his interest in missions, he and his wife visited every Mennonite Brethren Church throughout British Columbia and Alberta to promote the establishment of a missions endowment fund. With this assignment completed, the Wiebes took personal initiative in planning another, much more extensive trip during time they visited every MB mission station around the world. On returning to Canada, Paul wrote a fifty page report, “Our Trip Around The World to Mission Fields, Nov. 4, 1969 – Mar 31, 1970” offering a profile of global MB mission work at the time.

In retirement the Wiebes lived for some years in the Tabor Home in Abbotsford, BC. When Paul’s health deteriorated in 1988, he was transferred to the Menno Hospital, where he died on 23 August 1989.