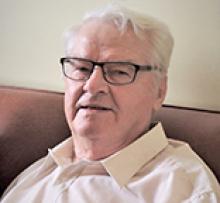 Menno Wiebe: anthropologist, social justice advocate, and amplifying voice for Indigenous people; born 13 December 1932 in Bannerman, Manitoba, to David and Margaret (Ens) Wiebe. He was the fifth of ten children. In 1959 he married Lydia Boese. They had two children, Rhonda and Tom. Menno died 5 January 2021 in Winnipeg, Manitoba.

The Wiebe family moved several times in rural Manitoba during the 1930s depression-era. In 1945, they settled in Mount Lehman in British Columbia’s Fraser Valley. In the early 1950s Menno did volunteer stints in tornado-torn Oklahoma and at a horticultural experimental station in Paraguay, which satisfied his impulse to serve and showed a healthy streak for adventure.

Menno Wiebe was ordained a minister in 1964 and accepted a leadership role with the Conference of Mennonites in Canada (CMC). After completing ten years of service as the executive secretary of the CMC Board of Missions, which included Mennonite Pioneer Mission (MPM), he took a position as director of Mennonite Central Committee Canada’s newly formed Native Concerns program in the fall of 1974.

In his role with the Mission board, in addition to offering encouragement and direction to mission workers, he challenged the mission workers and churches to re-examine their views of Indigenous peoples. He emphasized that Indigenous peoples have a parallel, not an inferior or lower culture to that of white society. For too long he felt that mission organizations had tended to look at Indigenous peoples as innocent children of the forest, like blank pages to be written on without understanding or appreciating their culture or deep spirituality.

Menno also emphasized the importance of local decision making, that people of the community should have the opportunity to state their expectations of the church and mission personnel, and that they should have a say in the selection and assessment of the people who were assigned to work with them. This was a radical step for any mission board to take because for too long the church dominated over Indigenous peoples and communities with no thought of releasing their clutch on them.

Already in the early stages of his involvement with the CMC mission board, Menno was a vigorous proponent of inter-church cooperation. In 1966, he helped organize an inter-church organization that sat together for the first time and whose members spoke to one another about their common task. This had a dramatic effect, for groups now recognized the power of a united voice.

One program, operated by MPM, was very close to Menno Wiebe’s heart. It was the Youth Opportunties Unlimited (YOU) Drop-in Centre in Winnipeg, which offered pastoral ministries, youth sport activities, counselling, and referral services. Sports were a vital part of the program. Menno felt that is was a vital element through which Indigenous peoples could begin to achieve a sense of peoplehood. It also served as an excellent community-building process, not only for the MPM workers, but for the Indigenous people who came from many scattered places to find friendship and companionship in the centre of the city.

While working at MCC Canada from 1974-1997 Menno Wiebe continued to build on the friendships he had built in both the Mennonite and Indigenous communities. He became known as one of the most knowledgeable Mennonites on Canada’s Indigenous peoples.

Menno was often chosen to provide leadership on various ecumenical boards and commissions. He was articulate and passionate about social justice in his presentations, which had a profound impact on his listeners. He saw his voice as amplifying the voices of Indigenous peoples and not speaking for them. In his role he testified before the Lubicon Settlement Commission, the Royal Commission on Aboriginal Peoples, the Northern Flood Agreement, the Aboriginal Justice Inquiry, the Leon Mitchell Inquiry regarding Treaty Land Entitlements, the Royal Commission on Northern Environment, and the Truth and Reconciliation Commission. He was convinced that the gospel had something to say to the sacredness of the treaties and the reckless way that development projects in the north had impacted Indigenous peoples without their consultation.

On one occasion Menno wrote about why he was involved with land issues: “For us it is a matter of biblical justice. The biblical reminder not to oppress the poor is very strong in the Old and New Testaments. Mennonite people, who themselves know all about land displacement, about being aliens in countries they have come to know as their own and about ethnic marginalization; they should be the first to understand the plight of original people who find themselves struggling for survival in their own homelands.” His prophetic voice and message were not always appreciated by his own people.

Menno Wiebe loved gardens and gardening, and this passion of planting and nurturing seeds was transplanted in many Indigenous communities in Canada through the Native Gardening Program that he initiated. Mennonite volunteers worked alongside Indigenous peoples, where local people grew food of their own. A good bridge-building opportunity, seeds of friendship were also sown though this project which would last a lifetime.

Menno Wiebe was a gifted orator and storyteller. The people who interacted with Menno also had rich stories of their interactions with him. Elder Clarence Nepinak, of Pine Creek First Nation, has reflected on his friendship with Menno. Clarence praised Menno for his gentle manner, leading by example, and his willingness to walk with people through dark valleys. He thought that maybe Menno’s love of music and poetry helped him cope in those tough times.

Menno Wiebe was an ambassador of peace, goodwill and reconciliation, whose work had a large impact on Indigenous relations in Canada.