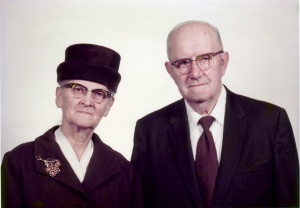 Henry Peter Wiebe: minister and founder of Bethesda Psychiatric Hospital; born 29 September 1898 in the village of Blumenhof, Borozenko Colony, in the vicinity of Chortitza, the oldest of the Mennonite colonies in the Ukraine, to Peter and Anna (Warkentin) Wiebe. He had seven siblings: George, John, Peter, Frank, Abraham, Helen and Anna. On 17 October 1926 he married Maria Unrau. They had two sons, Edward (married to Gertrude Wiebe) and Henry (married to Helen Koop), the former became a teacher, the latter a teacher, pastor and church planter.

In 1927 the family immigrated to Canada, settling first in Kitchener, then Stratford and finally in Vineland, Ontario. Henry had received a basic education in the Ukraine in the "Zentral" and "Kommerzschule," schools located in Halbstadt, Ukraine. After further training and employment at the psychiatric hospital in the area, "Bethania," Henry soon began his ministry to the emotionally and mentally challenged.

Henry was also a man of deep faith. Upon his coming to faith, he was baptized in the Mennonite Brethren Church in Tiege, Ukraine in 1923. Soon he was also ordained and became active in preaching and church leadership. Later, in Vineland, Ontario, he served as a lay minister in the Mennonite Brethren Church from 1938 to 1940 and again from 1948 to 1957 and was also moderator for a time.  But always, his major ministry was in the area of giving psychiatric help to those suffering from mental disorders. Already in 1934 when Henry and Maria lived in Stratford, they opened their home to the needy. In 1937 they purchased a farm near Campden just north of Vineland with a view to the future—a future of providing psychiatric help on their new farm.

The large brick house on his farm became a home for the mentally ill. After the Ontario Conference of Mennonite Brethren Churches bought the property in 1944, it became known as "Bethesda." This "Home" continued to expand as the Wiebes and others worked sacrificially and with great zeal. Its budget grew from the initial $3,000 in the 1930s to some $13,000,000 in 2007. Henry Wiebe, always known as a deeply spiritual man of great dedication, especially to those suffering from mental illnesses but also to his family and church, will long be remembered among the people of his community. He and Maria spent their last days at Tabor Manor in St. Catharines, Ontario, where he passed away on 17 June 1980.