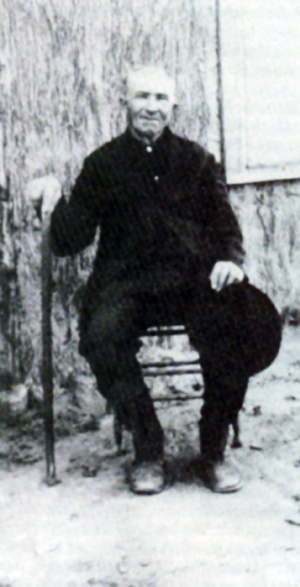 Diedrich D. Wiebe: minister and teacher; born on 17 August 1868 in the village of Heuboden, Bergthal Colony, South Russia. He was the youngest son of Bishop Gerhard Wiebe (1827-1900) and Elizabeth Dyck (1828-1876). Diedrich married Margaretha Klassen (1870-1903). Their marriage produced seven children, of whom two died very young. In 1903 Diedrich married his second wife, Katharina Pries (1883-1918) and together they had 10 children, of whom two died. Diedrich died on died on 22 September 1930 in Blumengart, Menno Colony, Paraguay.

Diedrich immigrated to Canada in 1875 along with his parents and siblings. They settled in the village of Chortitz on the Mennonite East Reserve in Manitoba. Diedrich was baptized on 2 June 1887 into the Chortitzer Mennonite Church and two years later married Margaretha Klassen.

Diedrich served his church community faithfully for many years beginning in 1905 when he was elected as "Waisenvorsteher" (administrator of the office responsible for orphans) of the Chortitzer Waisenamt. In 1917 he was called as a minister. He also served as teacher in the Mennonite village school. When he was almost 60 years old, Diedrich joined the migration of Mennonites from Manitoba to the Chaco in Paraguay, South America in 1927. Many people died on the way. Diedrich himself lost two sons and a son-in-law. In letters to his brothers he wrote about how hard it was, as the only minister in his group, to conduct a funeral almost every other day for months -- including his sons. Eventually he and his group reached the village of Blumengart and began planting and building. It was here after so much hardship that Diedrich D. Wiebe died on 22 September 1930.