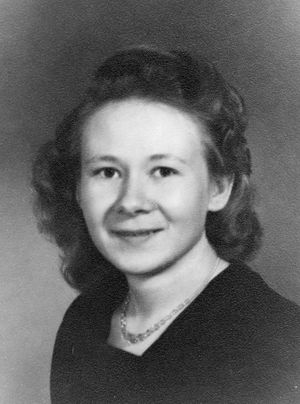 In 1928 the Wiebe family immigrated to Canada, settling first in Winkler and then in Gretna, Manitoba. Anne attended Winnipeg Normal School, 1936-1937 and then began her teaching career. From 1938 to 1945 she was an elementary school teacher in three different southern Manitoba towns: Schoenwiese, Gnadenthal and Rosenfeld, Manitoba.

When her family moved to Kitchener, Ontario Anne went with them and continued her education there. At the same time as teaching, Anne studied at Waterloo Lutheran College, then affiliated with the University of Western Ontario from which she received a BA in 1951. She continued graduate studies at Columbia University while living in New York City and received a MA in History & German from that university in 1953.

Throughout her 35 years of teaching Anne taught mostly History and the German language in the following schools in Ontario: a senior high school in Windsor; at Eden Christian College (also called Eden High School) in Virgil; at Galt Collegiate Institute (1956-1957) and Glenview Park Secondary School (1957-1966), both located in the former city of Galt now part of Cambridge, Ontario; and at Waterloo Collegiate Institute (1967-1977). Anne retired from teaching in 1977.

History was Anne Wiebe’s passion; this was evident in her teaching. She frequently used slides from her travels to illustrate the topics she taught such as Ancient History. When Jim Quantrell retired after working for 26 years as the Cambridge city archivist, he told The Record newspaper reporter: “It was at Glenview where teacher Anne Wiebe’s stories of travelling to Europe to study ancient civilizations sparked his lifelong interest in history.” The archival sources in Kitchener state that, “Anne had great rapport with her students and she was honoured as a teacher several times [with awards].”

Anne’s other passions were recording and documenting family history, travelling, photography, baking and cooking. Having no children of her own, she spent a lot of time nurturing her brother Abram’s six children and later her grand-nieces and nephew. Many summers during her teaching career, she traveled with her sisters and friends to places such as Europe, Ukraine, the Middle East, China, Australia, New Zealand and the Canadian Arctic. One of her notable recollections is of seeing the Great Wall of China, knowing that it was the only man-made structure visible from the moon.

Anne Wiebe was influential both in her career as a teacher and in her family. Her life and work were based on her Christian faith and an attitude of service to others.

Wiebe, Anne. "The Mennonite Brethren in Ontario: a short history” in Mennogespräch 4, no. 1 (March 1986): 4-8. http://mhso.org/sites/default/files/publications/Mennogesprach4-1.pdf.