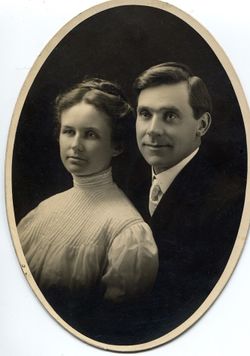 Paul's father, David Whitmer, came from a conservative Mennonite family, but was not conservative himself. He voted in local and national elections throughout his life, and did not believe the dress restrictions coming into the Mennonite Church were appropriate. Anna Otto Whitmer grew up in the Reformed Church, and did not join the Mennonite Church until several years after marriage, when the local Mennonite community experienced a division led by Jacob Wisler. Anna persuaded her husband to stay with the English-speaking side of the division, though his brothers all joined the Old Order Mennonites. Paul Whitmer's home was greatly enhanced by a library of several hundred volumes of classical literature and history bequeathed to the family by Anna Otto Whitmer's uncle.

Paul Whitmer grew up on the family farm and attended a local one-room school. He graduated from high school in 1894, and taught in a local elementary school from 1894-1898. He briefly attended Northwestern Ohio Normal School (now Ohio Northern University) at Ada, Ohio in order to complete his high school work. He then attended in succession Elkhart Institute (where he met his future wife), Goshen College, and Oberlin College where he earned an AB degree in 1907. He studied at the Oberlin Graduate School of Theology and earned a BD in 1908. Later he obtained an AM degree at the University of Chicago in the Department of Systematic Theology (1917). His thesis was titled, "The Christology in Milton's English poems."

On 17 November 1901 after returning from Elkhart Institute to continue public school teaching, Whitmer was ordained by lot as a minister in the North Lima Mennonite Church, though much of his leadership was at a union church in East Lewistown, Ohio. In 1903 while taking some courses at Moody Bible Institute, Noah E. Byers, President of the new Goshen College being launched that fall, asked Whitmer to take further academic training with a view to becoming head of the Bible department at Goshen. During his seminary years at Oberlin, Whitmer served as a student pastor at two Congregational churches. The years at Oberlin profoundly influenced Whitmer's theological perspectives in an ecumenical direction.

At Goshen College Paul Whitmer first served as Professor of Bible (1908-1911), then Professor of English (1911-1916). In 1910 he was also selected as pastor of the College Church. Controversy in the Indiana-Michigan Mennonite Conference arose in 1913 that forced Noah Byers out as president of Goshen over issues of dress standards of faculty and students, employment of teachers who were not members of the Mennonite Church, and the content of some College publications. Paul Whitmer also resigned that year with the intent of moving to Bluffton College, partly because he had been offered the president's job behind Noah Byers' back. However Whitmer continued at Goshen when his friend and colleague John E. Hartzler was named the new president. Whitmer served as Dean and Professor of English from 1913-1916. He finally resigned in August 1916 after it became clear that the Indiana-Michigan Mennonite Conference was demanding that college faculty and students adhere to stricter dress regulations.

Paul Whitmer studied for his Master's degree in Chicago the following year. During that year Goshen College tried to get him to return as Dean, and Bishop Daniel Kauffman tried to outline a path through which Whitmer could still attain a major leadership role in the Mennonite Church. When Whitmer declined the plan, Kauffman said, "Then we will show you a back seat." (Whitmer, p. 99).

In September 1917 Whitmer joined the faculty at Bluffton College as Professor of Bible. Here he joined his former Goshen colleagues Noah Byers and C. Henry Smith, and was soon joined by John E. Hartzler. Whitmer also taught at the Witmarsum Theological Seminary located at the College, but with its own charter beginning in 1921, and served as its Dean and Professor of Church History from 1921-1931. The vision for Witmarsum was as an inter-Mennonite seminary, though this vision did not survive and it closed in May 1931. Whitmer enjoyed his time at the seminary, but recognized that student enrollment remained erratic, and some faculty members were not as committed to the seminary as they could have been.

When Paul Whitmer moved to Bluffton, he became the unpaid pastor of the Zion Mennonite Church located eight km west of Bluffton and served there until 1924. Questions around enforcement of conformity in dress had remained a major issue in the Mennonite Church, and in October 1924 the Zion congregation and Paul Whitmer were suspended by the Executive Committee of the Ohio and Eastern Mennonite Conference, which ironically was moderated by A. J. Steiner, Paul Whitmer's brother-in-law. The Zion congregation soon disbanded, but family relationships survived and Whitmer still occasionally preached in his former eastern Ohio community.

In 1927 Paul Whitmer, now part of the General Conference Mennonite Church, agreed to become interim pastor of the Grace Mennonite Church in Pandora, Ohio. When the congregation failed to find a permanent pastor, Whitmer continued as the pastor at Grace until 1941. He enjoyed this role, but later declared he had never worked harder than in his years pastoring at Grace.

Paul Whitmer's contributions to the larger Mennonite church included several years as contributing editor to the Christian Exponent, secretary of the All-Mennonite Convention, 1922-1942, service on Middle District and General Conference boards, and on the Board of Bluffton College for six years.

In retirement Paul Whitmer sold Farm Bureau Insurance until about 1950, since none of his vocations had been especially remunerative. Paul Whitmer's obituary said his students would remember him as an inspiring and understanding teacher who also imparted his deep religious faith, which was one of trust and devotion.

Warkentin, A. and Melvin Gingerich, compilers. Who's who among the Mennonites. North Newton, KS: Bethel College, 1943: 272.