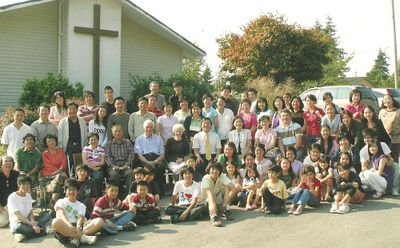 White Rock Mennonite Christian Fellowship can be traced back to immigrants from Taiwan that began arriving in British Columbia in the 1990s. Many of these were professionals but because of various government requirements, they were not able to find employment. As a result, some of them began their own business ventures. In other cases, the husband would return to Taiwan while the rest of the family remained in Canada. Some of them were Christians but the majority were not.

One family, Harold Lue and his wife Katharine Wu, were members of the Mennonite Church in Taiwan and Katharine worked as a family counselor. She was soon in high demand as a family counselor seeking to help Taiwanese families adjust to their new circumstances. She came in to contact with Living Hope Christian Fellowship and eventually the Living Hope Mandarin (or Taiwanese) Ministry was envisioned.

On 16 September 1998 Katharine started a Bible Study in her home, reaching out mainly to Taiwanese women and their families in the White Rock and South Surrey area. Since Peter and Sue Kehler had worked with her in Taiwan, they were asked to come and assist her with the Bible Study and also begin teaching English as a Second Language (ESL) classes. They began on 13 November with a Beginner and an Advanced class. The first half hour was devoted to teaching English grammar and the second half was used to teach Canadian customs and culture and later using Bible stories for study and conversation. Lorin Bergen, pastor of Living Hope Christian Fellowship, preached at the White Rock Mennonite Christian Fellowship (WRMCF) one Sunday a month and served the communion and baptized the new believers. Living Hope also provided some of the funds for ministry at WRMCF. Mennonite Church British Columbia through the Evangelism and Church Development Committee (ECDC) also contributed to the ministry for a number of years. The congregation joined Mennonite Church BC in 2000 with 7 members.

The group continued to grow, particularly with their youth ministry, so they rented the small chapel in the Seaview Pentecostal Church for ESL on Fridays and worship service on Sunday afternoon. They remained in this building until they moved to the Oxford Baptist Church a few blocks down the street in 2003. The attendance at the worship services was usually about 40 but increased to almost 70 for a short period. They have had a choir for many years and even participated in a number of music festivals.

The first years were devoted in helping people to understand the Christian faith and family counseling and in assisting persons in their adjustment to Canada. One unique feature of WRMCF was their sense of community. To encourage their non-Christian friends to explore the Christian faith they invited them to attend the weekly Bible Studies, the Sunday worship services and the church’s annual retreats. Their first retreat was held at the UBC Loon Lake Recreation and Education Center, another at Manning Park, and one at Stillwood Camp, overlooking Cultus Lake.

Attendance has declined over the past few years, with some returning to Taiwan, and other relocating.

In 2012 the congregation changed its name to White Rock Mennonite Church.

In March 2019 Chris Lin began to serve as pastor of the congregation. He followed Timothy Liang who left the end of 2018.