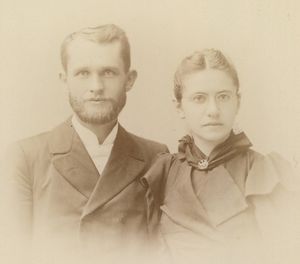 Peter H. Wedel: an evangelist and missionary of the Mennonite Brethren (MB) Church; was born in Alexanderwohl, Molotschna Mennonite settlement, South Russia on 7 April 1865, the fourth child of Cornelius P. Wedel and Helena (Wiebe) Wedel, and brother of Cornelius H. Wedel. He married Martha Liebig in 1895 and they had one son (see additional information for further information regarding Peter's family).

Wedel felt called to serve as a foreign missionary. Since the MB Church at that time had no foreign mission field, he decided to go under the German Baptist Missionary Society. After his marriage to Martha Liebig he left for Cameroons, Africa, stopping in Germany and also making a visit to the Mennonite settlements of South Russia, in both countries conducting very effective evangelistic campaigns. After two years of effective service on the mission field his health required him to leave. He died on the voyage to Europe on 10 August 1897, and was buried at sea. His short service and early death had a profound effect upon the Mennonite Brethren Church and was a powerful influence in beginning its own foreign mission work.