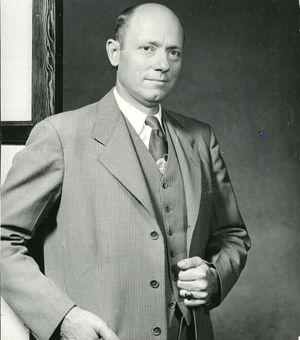 David was raised in Goessel, Kansas and attended Goessel Preparatory School from 1924 to 1925. He graduated from Bethel Academy in 1927.

David taught at Heimbaugh County School and coached Goessel High School basketball from 1927-28. He graduated from Bethel College in 1933. He earned a B.D. degree from Colgate Rochester Divinity School, Rochester, NY in 1936.

Wedel was a member of the Alexanderwohl Mennonite Church at Goessel until receiving his ordination in 1936 when he took the pastorate of First Mennonite Church in Halstead, Kansas. He served from 1936 to 1946 with a brief hiatus to be director of the Civilian Public Service Camp in Marietta, Ohio, in 1941.

In 1946, then Bethel President Edmund G. Kaufman invited Wedel to come to the college as acting dean while the current dean took a sabbatical, and he taught Bible and religious education from 1946 until 1948. Following that, Wedel went to Denver for one year to get his doctorate in Christian education from Iliff School of Theology, graduating in 1952. Wedel served as Acting President of Bethel College from 1950 to 1951 and as Executive Secretary of the General Conference Mennonite Church Board of Education and Publication from 1951 to 1952. In 1952 Wedel became President of Bethel College, serving in that capacity until 1959.

Wedel wrote a history of Alexanderwohl Mennonite Church entitled The Story of Alexanderwohl, published in 1974 by the Goessel Centennial Committee. He was named Bethel Outstanding Alumnus for 1982. Wedel loved to sing both in English and Low German and sang with the Bethel College Men’s Quartet and Lake Avenue Baptist Church in Rochester.

D. C. Wedel was a man of rectitude, honor and faith.