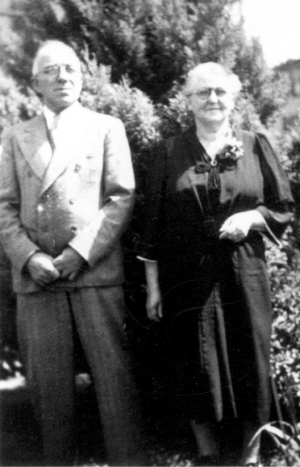 Noah R. Weber: minister of the West Zion Mennonite Church near Carstairs, Alberta, was born in 1875 and died in 1943. He married Sarah Shantz. They were the parents of eleven daughters and one son.

Noah Weber was chosen by lot and ordained as minister of the West Zion Church in 1911, following the death of Bishop Israel R. Shantz. He led the congregation during the economically prosperous but emotionally difficult years of World War I, and during the challenging post-war years when drought and depressed farm commodity prices resulted in farm protest movements. These wartime and post-war developments, in turn, resulted in greater emphasis on Mennonite non-conformist practices. The Spanish flu epidemic exacted a heavy toll in some West Zion families, and there were also deaths of young mothers in childbirth and of young children due to outbreaks of diphtheria and other childhood diseases.