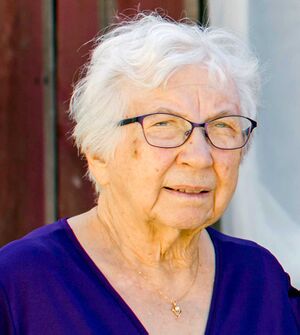 Doris Jantzi: farmer and pioneering woman pastor, was born 20 April 1930 on the family farm at Wilmot Centre, near Kitchener, Ontario, Canada, to Allan W. Jantzi (1 October 1901-14 December 1978) and Veronica "Fannie" Zehr (21 June 1906-10 March 2001). Doris was the second of three daughters, Grace (Holst), Doris and Eva (Schwartzentruber). She was baptized at Steinmann Mennonite Church in her teens. On 29 May 1954, she married Rod Weber, son of Burton Bowman Weber (9 April 1895-14 October 1978) and Ethel "Irene" Spitzmesser (3 June 1898-17 May 1980). Doris died on 9 September 2021 at Wellington Hospice in Guelph, Ontario. Due to the COVID-19 pandemic, a celebration of her life was held outdoors at Mannheim Mennonite Church, where the Webers are members, on 4 September 2021. Burial was at the Wilmot Centre Cemetery.

Doris sensed a call to ministry when she was very young. At about age 10, she asked her mother if she could be a pastor someday. Her mother didn't think so. Her mother was wrong.

Doris went to Virginia in her early 20s, where she studied at Eastern Mennonite College for one year. Returning to Ontario, she attended Ontario Mennonite Bible School and Institute in Kitchener, also serving there as secretary (1953-1954) until she married Rod Weber. They operated the family farm (the sixth generation to do so), and Doris gave birth to six children in nine years. In January 1967, temporarily leaving the care of the farm to others, the family moved to Harrisonburg, Virginia, where Rod studied at Eastern Mennonite College and Seminary. Alongside being a wife and mother, Doris took more college courses, earning a two-year college certificate. She also did summer courses at the Bowman Gray School of Pastoral Counselling in Winston-Salem, North Carolina.

From Virginia, Doris and Rod moved to Ohio, where Rod served as the pastor of the Leetonia Mennonite Church for two years. Doris was "the pastor's wife" with no leadership role before returning to the farm in Ontario in 1972. Two years later, Rod was appointed interim pastor at Avon Mennonite Church in Stratford, a Western Ontario Mennonite (WOM) congregation where Doris again was "the pastor's wife" although she preached her first sermon there on 6 March 1977. On 8 March 1979, the WOM conference, later part of Mennonite Church Eastern Canada (MCEC), jointly commissioned Doris and Rod as ministers, a designation later changed to ordination. Thus Doris was the first Mennonite woman to be an ordained minister in Ontario. She served as WOM Youth Minister from September 1980 to August 1984. She also helped plant a church in Brantford, Ontario.

Doris continued juggling ministry, family, farm and studies in social development at Renison College, part of the University of Waterloo, earning a BA degree. In 1981, she served on the Associated Mennonite Biblical Seminary board in Elkhart, Indiana and became a student there, taking off-site courses. In her final year, Doris made many six-hour trips to the Elkhart campus, returning home on weekends to pick up duties at the farm and church. She received an MDiv degree in 1986.

Doris found her deep sense of call as most empowering. To her surprise, she discovered preparing and delivering sermons gratifying, citing affirmation from both young and old. Pastoral care and a non-threatening presence were other strong abilities that she saw as gifts from God. However, one man who struggled to accept a woman pastor said it would be fine for her to visit him if he were sick but not to conduct his funeral should he die.

Doris served as pastor or interim pastor at these MCEC congregations: Avon (Stratford), Valleyview (London), Waterloo North, Mannheim, Bloomingdale, Listowel and Danforth (Toronto), her final pastorate. In 1989, she served as a chaplain at St. Mary's General Hospital, a Roman Catholic hospital, in Kitchener, Ontario, for several years. In her words, this was her "highest learning curve for ministry." In each placement, Doris served by "listening and loving." She retired from professional ministry in 2002.

"God's love enables me to love people as they are, and yet challenge them as to what they might be," said Doris. "The opportunity that ministry gave to me to share my life and heart with others...has been a great joy."