Anna Weber: Fraktur artist, b. 3 June 1814 in Lancaster County, Pennsylvania to John (d. 1854) and Catherine (Gehman) Weber (d. 1864). Anna was their oldest living child; she had one younger brother named Johnny. She never married. Her father who had been chosen a deacon by lot and later was ordained as minister, provided well for his family. This made it possible for Anna to remain at home until the death of both of her parents. After their death, she lived with families in her community. She died in 1888.

In 1824 Anna moved with her parents and her brother, Johnny to Waterloo County, Canada, where the family established a farmstead on the banks of the Conestoga River, south of the present-day village of Conestoga. 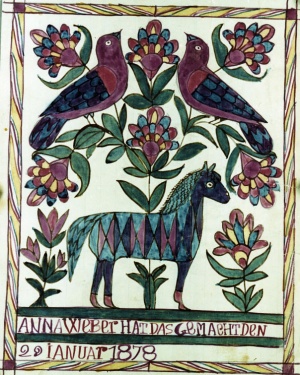 Anna attended school in Pennsylvania, but further schooling in the Canadian pioneer settlement was not possible. From an early age Anna was skillful in needlework and stitched for herself a sampler—a decorative linen cloth or show towel. She made several for other young women who were not as adept as she. Anna also created pictures in rug hooking, but drawing was her favourite. She used whatever paper was available—often fragile lined notebook sheets. Usually she created a decorative border around her pictures with the writing "ANNA WEBER HAT DAS GEMACHT" (Anna Weber has made this). Frequently she added the date. In many cases the pictures appear to have been given to children in the family with whom she stayed. No records have been found to show that she received money in payment.

Anna Weber holds the distinction of being the most prolific Fraktur artist in Waterloo County. Fraktur was an art form practised by Pennsylvania German schoolmasters in the late eighteenth and first half of the nineteenth centuries. Over eighty of her pictures, done with ink and a paint wash, have been found in the homes of descendants with whom she lived after her parents' death. She would not have called herself an artist, nor did her community. They labeled her sondiboa (strange) and gshpasich (queer). Possibly, later generations would have labeled her developmentally challenged. But she had an undeniable talent for drawing. Even as an older woman, she retained her passion for drawing objects relating to family, religion and community in the style of Fraktur. Anna Weber remained the sole female artist within the world of Fraktur art which was almost exclusively dominated by men in her era.

Descendents of members of Anna's community came to treasure her pictures. A few of her drawings were acquired by libraries and archives.

In her 73rd year, the year she died, Anna used English in her signature on one of the last pictures she drew: " ANNA WEBER MAT THIS 28 MERZ 1888."