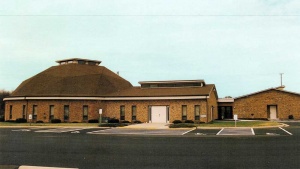 Roy D. Kiser harbored a vision for a Mennonite Church in Waynesboro, Virginia for 15 years. He finally articulated that vision to the Mountain View Mennonite Church where he and his wife, Charlene, were the pastoral leadership couple. On 17 June 1981 Roy and Charlene were chosen to begin the Waynesboro work. Approximately 40 other members agreed to undertake this new experience. A commissioning service was held at Mountain View on 8 November 1981 at which 25 members were commissioned as "missionaries" to begin the work. Stanley Shirk was also installed as pastor of Mt. View. The vision for the new church emphasized "community fellowship, Christian love toward all persons, close family ties, sharing in times of need and radical discipleship (following Christ's way in daily living.)"

Waynesboro's first public worship service was held 15 November 1981 at Kate Collins School in Waynesboro with 187 persons in attendance and an "incredible" offering of $944. A month later, attendance averaged 178, total receipts had reached $5,910. and the Building Fund totaled $3,767. On Charter Membership Sunday on 14 February 1982, 217 persons were present when the first 78 members were received into the new church family.

By January 1983 membership had risen to 100 and average attendance to 205. A record number of 265 were in attendance on 16 October 1983. By early 1985 the building fund had increased to $103,952. A $35,000 five-acre piece of land was secured on 8 December 1993. A 5,500-square foot geodesic dome structure became the focus of attention as the first sanctuary, office and library were planned along with parking lot and sidewalks at an estimated cost of $165,000. Ground-breaking ceremonies took place on the first Sunday of March 1985 and construction began 2 July 1985. The first service was held in the new facility on 30 March 1986 and the debt-free building was dedicated on 18 May 1986.

A period of membership decline occurred between 1985 and 1989 as some original members felt their mission has been accomplished, and they returned to their "home" churches, such as Mountain View, Springdale, and Stuarts Draft. Waynesboro's beloved founder, Roy Kiser, died after a lingering illness on 4 February 1996. He was active and productive almost to the very end. Stanlee Kauffman then assumed the pastorate of Waynesboro Mennonite on 23 July 1989. After that time the church continued to grow.

A new nursery and kitchen addition was started on 19 November 1991. Construction began on a large multi-purpose social hall on 29 August 1992. On Pastor Kauffman's retirement 2005, Howard Miller was called by an overwhelming vote of the membership. A graduate of Eastern Mennonite University and Seminary, Miller had been Associate Pastor of Lindale Mennonite Church of Rockingham County, Virginia. Prior to his selection as the pastor, Miller had served as Overseer of eight Southern District Churches of Virginia Mennonite Conference. Miller was installed as Senior Pastor on 12 June 2005.