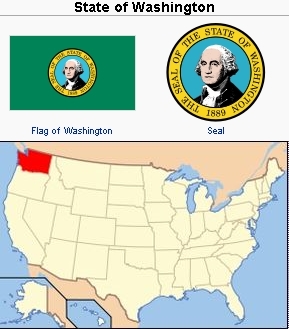 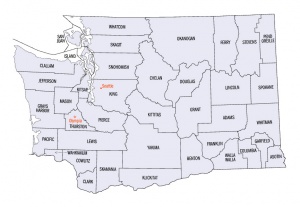 The State of Washington is located in the Pacific Northwest region of the United States of America. It is located north of Oregon, west of Idaho, and south of the Canadian province of British Columbia. The state has an area of 71,342 square miles (184,827 km²). Washington's population in 2012 was 6,897,012, with over half living in the Seattle metropolitan area.

Archaeological evidence suggests that the area was one of the first populated areas in North America. The area that is now Washington state was originally inhabited by various Native American tribes, including the Chinook, Lummi, Quinault, Makah, Quileute, and Snohomish along the coast and the Cayuse, Nez Percé, Okanogan, Palouse, Spokane, Wenatchee, and Yakima in the interior.

The first European settlers arrived in 1775 and the area was claimed by Great Britain in 1811. Joint occupancy between Great Britain and the United States was established in 1818, and the area was highly contested by both countries until the Oregon Treaty was signed in 1846. The region was part of the Oregon Territory from 1848 until 1853, when it was separated from Oregon and became known as Washington Territory. Washington became the 42nd state of the United States in 1889.

Washington is a leading producer of lumber products and also produces a number of fruits and vegetables. Manufacturing includes the design and manufacture of aircraft, automotive, and computer software development.

In 2001, 42% of the state's residents stated that someone in their household was affiliated with a church or other religious establishment. The major religious affiliations were: Protestant: 49% (Evangelical: 25%; Mainline: 23%; Other Protestant: 1%); Unaffiliated: 25%; Catholic: 16%; Latter-day Saint: 2%; Jewish: 1%; Muslim: 1%; other religions 3%. The percentage of non-religious people in Washington is higher than any other state other than Colorado.

The one Mennonite Brethren (MB) church in Washington is the Whitehorn MB Church, near Blaine, which was organized in 1937.

Of the eight churches in the state, one is in the northeast, one in the southeast, two in the east central, two near Seattle, and two not far from Vancouver. Total membership in 1957 was 752—Mennonite Brethren 187, General Conference Mennonite 565. -- Willard W. Wiebe