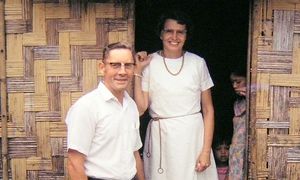 In 1936 Elmer and his parents left Saskatchewan to settle on a farm on Huntingdon Road in Abbotsford. The Warkentins attended the South Abbotsford Mennonite Brethren (MB) Church, where Elmer was baptised on 30 July 1939. In 1950 Elmer became a charter member of the Abbotsford MB (now Central Heights) Church.

Elmer left home in 1945 to attend Prairie Bible Institute in Three Hills, Alberta, where he completed his high school equivalency and then a four-year Bible school programme, graduating in 1949.

Elmer’s life-long interest in missions was nurtured in his parent’s home, who often extended hospitality to visiting missionaries. A world map flagging global mission work adorned the Warkentin residence. As a young adult, Elmer helped establish Sunday school in the South Otter area (later Hillside Community Church). For a time he served with the West Coast Children’s Mission of BC, sailing up the British Columbia coast in a 36 foot motor vessel, ministering to families and children in isolated areas. These itinerant visits resulted in the beginning of Camp Homewood on Quadra Island.

During his studies at Prairie Bible Institute (PBI), Elmer felt God’s call to mission service. A widowed missionary, Sylvia Sirag, representing the Regions Beyond Missionary Union (RBMU), was visiting PBI. In pleading her case for the Dayak people of Indonesia, she appealed for commitment, stating "We need men, not just women." When she let it be known that a driver was needed for the mission, Elmer was hooked because he loved trucks. After Ruth completed her Bible School studies, the couple left for Borneo, Indonesia in February 1951. It was here that four of their children were born.

Elmer and Ruth grew up speaking German and English, to which they added Indonesian as their ministry language. Mission work for the Warkentins involved frequent treks to remote villages, establishing churches and doing medical work. Initially the Dayaks were unmoved by the Christian gospel. Since they were head-hunters, Elmer was considered an attractive conquest. However, by March 1954 some 160 local Dayak congregations had been planted, resulting in the establishment of the Fellowship of Gospel Proclaiming Churches, in effect a national church.

An expanding network of churches required trained leaders. To satisfy these needs, Elmer and Ruth become involved in giving birth to the Berea Bible School (later Berea Theological Institute) in Ansang, Kalimantan. On 11 August 1957 some two dozen young people became charter students of this institution. For the next 34 years, Elmer and Ruth dedicated their energies to serving this school, which eventually expanded to include a theological seminary. To their great joy, graduates of this institution matured into spiritual leaders.

When the Warkentins retired from the Berea school in 1989, Elmer and Ruth relocated to Anik, Indonesia, where they refocused on mentoring and nurturing national church leaders. Elmer and Ruth’s legacy is the more remarkable considering formidable threats they faced, including the Communist coup in 1965, the Dayak uprising in 1967, and the Muslim edict in 1978 that all Christian influence in Indonesia was to be terminated.

In 1993 Elmer was diagnosed with cancer, forcing retirement to Abbotsford. After Elmer’s death in 1993, Ruth continued translating Bible stories and lessons for use in the Kalimantan churches. Between 1994 and 1997 Ruth visited Indonesia several times. She died in 2000 and is buried in the Hazelwood Cemetery in Abbotsford.

Conley, Joseph F. Drumbeats That Changed the World: A History of the Regions Beyond Missionary Union and The West Indies Mission 1873-1999. Pasadena: William Carey Library, 2000.