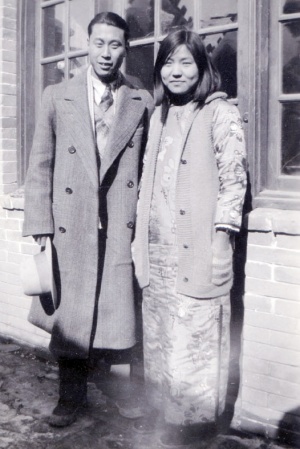 Stephen Wang (Wang Xin-fu) was the oldest of three sons, and was born in 1905 into the home of a poor peasant family in Henan (Honan) Province of China. His father, a Confucian scholar and teacher, became a Christian and later was employed as an evangelist in the General Conference Mennonite Church mission at Kaizhou (Kai Chow, later Puyang). Stephen studied in the Mennonite mission schools at Kaizhou. There he became a close friend of classmate James Liu. In 1928 with assistance from E. G. Kaufman, Liu and Wang entered Yenching University in Beijing where they studied for two years. From 1930 to 1932 they studied at Bluffton College and Bethel College, graduating from the latter school.

When Liu and Wang returned to China as the first American-trained Chinese in the Chinese Mennonite Church, Wang became director of youth work on the mission staff at Damingfu (Taming-fu), 1932-1933. On 13 July 1934 he married Zhang Zhang Ruiling (Margaret), headmistress of a nearby Christian girls' school. In 1934 they moved to Kaizhou where both taught in the Mennonite high school and led in the church program.

With the Japanese invasion of China in 1937, Wang and his family fled south with the intention of returning soon to Kaizhou. As the war continued, the Wang family moved westward, ending in Lanzhou, Ganzu Province, where Stephen taught physical science in several universities (1943-1950). Three of the Wang children died on the westward trek.

In 1950, the Wangs moved to Northeastern Normal University in Zhangchun in Jilin Province, where Stephen taught chemistry until the 1980s. During the Cultural Revolution (1966-1969), Stephen was sent with his family to work for four years in the countryside. Stephen and Margaret Wang had two daughters and three sons.

It had long been assumed that, when communications were broken off during World War II, Stephen Wang had died. In 1980 he renewed contact in Hengyang with his old friends, James and Hazel Liu. In 1982, on the 50th anniversary of his graduation from Bethel College, he was invited by Bluffton and Bethel Colleges to visit churches and mission and college friends in the United States. Stephen Wang died in 2001.