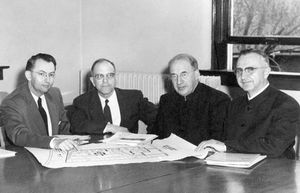 Erland Waltner: pastor, seminary professor and president, and denominational leader was born 7 July 1914 in Hurley, South Dakota, USA to Benjamin J. Waltner (10 April 1888-15 November 1985) and Emma P. Miller Waltner (19 February 1889-15 January 1982). He was the eldest child in a family of two boys and one girl. On 5 June 1939 he married Mary Winifred Schlosser (23 May 1914-17 May 2012) who was born in Honan, China to Free Methodist missionary parents George and Mary C. Ogren Schlosser. They had four daughters. Erland died 12 April 2009. Erland and Winifred are buried at the Prairie Street Cemetery in Elkhart, Indiana.

Waltner's family heritage included European Hutterite, Amish and Mennonite roots. His ethnic people, the "Swiss Volhynians," migrated to South Dakota in 1874. He grew up in the Salem church near Freeman and was tapped for church leadership at an early age. The return of his great uncle from Leavenworth Military Prison after World War I was one formational event for Waltner's lifelong commitment to Christian pacifism.

Waltner graduated from Marion High School (1931), attended Freeman Junior College, and graduated from Bethel College in Kansas (1935) and from the Biblical Seminary of New York (1938), where he was drawn to the inductive method of Bible study. Following his ordination on 28 August 1938, he became the pastor of the Second Mennonite Church in Philadelphia, Pennsylvania. While in Philadelphia he took courses at the Princeton Theological Seminary, and then at the Eastern Baptist Theological Seminary, where he received his MA in 1940 and ThD in 1948. His dissertation was "An Analysis of the Mennonite Views on the Christian's Relation to the State in the Light of the New Testament." From 1941 through 1949 Waltner pastored the Bethel Mennonite Church in Mountain Lake, Minnesota.

In his theology and church relationships, Waltner successfully strove to find a middle ground between Mennonite liberals and conservatives. The conservative leaders at Grace Bible Institute invited him to become president of that institution. He declined. For eight years (1949-1957) he taught Bible at Bethel College. His theology was strongly Christocentric.

In 1957 he left Bethel to assume the position of Professor of English Bible and President at Mennonite Biblical Seminary (MBS). He played a significant role as the seminary moved from Chicago to Elkhart, Indiana, and in building the relationship with Goshen Biblical Seminary. He remained in these roles until his retirement in 1978, and he continued to teach at MBS part-time for many more years.

Waltner wrote the commentary on the New Testament book of 1 Peter for the Believers Church Bible Commentary (1999). In his preaching career he delivered more than 4000 sermons. In retirement he served as mentor to many students and friends, and invested much time and energy in the ministry of spiritual direction.

Books by and about Erland Waltner

Waltner, Erland. Learning to understand the mission of the church. Newton, Kan : Faith and Life Press, 1968.