From GAMEO
Revision as of 16:40, 22 June 2016 by SusanHuebert (talk | contribs)
(diff) ← Older revision | Latest revision (diff) | Newer revision → (diff)
Jump to navigation Jump to search
A checked version of this page, approved on 29 June 2016, was based on this revision. 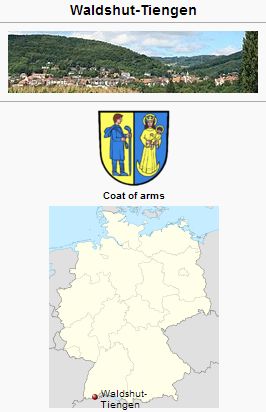 Waldshut was the seat of an Anabaptist congregation from April to December, 1525. Dr. Balthasar Hubmaier came to Waldshut from Regensburg as Catholic pastor in the spring of 1521, where he gradually became a Lutheran (from 1522). Early in 1525 he began to question infant baptism. On 2 February 1525, Hubmaier published his Oeffentliche Erbietung, offering to prove in a public debate that infant baptism had no foundation in Scripture, but the request for a disputation was not granted. When Wilhelm Reublin appeared in Waldshut from Zürich, he found a ready response in Hubmaier who was baptized on Easter (16 April) with 60 others by Reublin. Hubmaier in turn baptized over 300 others in the days immediately following Easter, using a milk bucket filled with water from the fountain in the town square. He also served the new congregation with the Lord's Supper and washed their feet. Apparently a substantial part of the town's population became Anabaptist. Strangely nothing further is known about the Waldshut Anabaptists, although the congregation must have continued until the final capture of the city by the forces of the Austrian government, which occurred on 5 December 1525. Hubmaier himself fled, telling the city council at its "surrender" meeting on 5 December that since Catholic worship would be restored by the conquerors he could not stay.

See Hubmaier, Balthasar, which does not report on the congregation